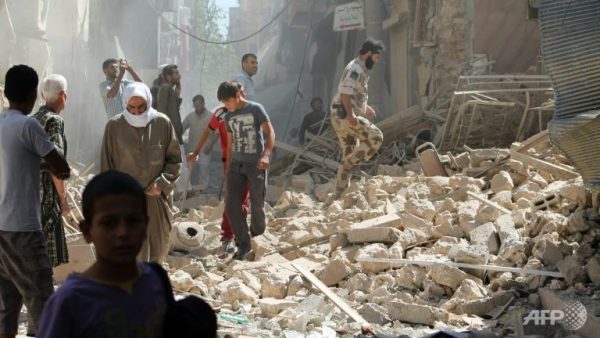 The fighting in Syria over the past five years has left more than 270,000 people dead, according to the Syrian Observatory for Human Rights
Share:

Syrian rebel groups said on Saturday they would consider a ceasefire deal brokered by Russia and Turkey “null and void” if the Damascus government’s forces and their allies continued to violate it.

Russia, which supports Syrian President Bashar al-Assad, has urged the United Nations to give its blessing to the fragile ceasefire, the third truce this year seeking to end nearly six years of war in Syria.

Clashes and air strikes have persisted in some areas since the ceasefire began on Friday, though the Syrian Observatory for Human Rights, a monitoring group, said on Saturday the truce was still largely holding.

“Continued violations by the regime and bombardment and attempts to attack areas under the control of the revolutionary factions will make the agreement null and void,” a statement signed by a number of rebel groups said.

The statement said government forces and their allies including Lebanese Hezbollah had been trying to press advances, particularly in an area northwest of Damascus in the rebel-held Wadi Barada valley.

The Observatory, which is based in Britain, said government forces and the rebels had clashed on Saturday in Wadi Barada.

Rebels say the army is seeking to recapture the area, where a major spring provides most of Damascus’s water supplies. Several people were killed in violence there on Friday, the Observatory said.

Blasts from government shellfire were also heard in the southern provinces of Quneitra and Deraa, the Observatory said.

Each side blames the other for continued unrest. Russia’s defence ministry said on Friday rebels had violated the truce 12 times in 24 hours.

Russia and Turkey, which backs the armed opposition to Assad, brokered the ceasefire agreement in the hope of preparing the way for peace talks in Kazakhstan in the new year.

In their statement, the rebels said it appeared the government and the opposition had signed two different versions of the ceasefire deal, one of which was missing “a number of key and essential points that are non-negotiable”, but did not say what those were.

There has been confusion over which groups in the opposition are included in the ceasefire. Islamic State, which has made enemies of all sides in the conflict, is not included.

The Syrian army said on Thursday the militant group formerly known as the Nusra Front was not part of the truce. However, several rebel officials said the group, which has been renamed Jabhat Fateh al-Sham, was also included in the ceasefire deal.