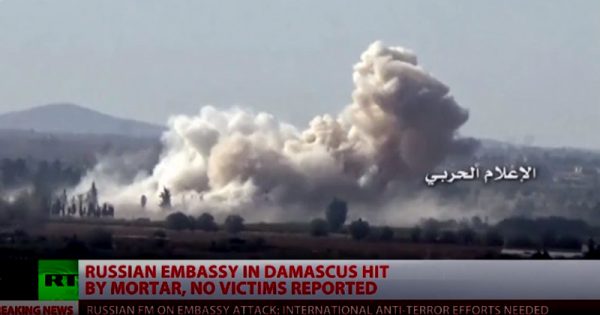 The Russian embassy in Syrian capital of Damascus was shelled twice on Wednesday afternoon, Russian Foreign Ministry said in a statement, calling it a provocation aimed at derailing peace settlement in the country.

Announcing the attack in a statement, the foreign ministry called said the shelling was a “provocation” aimed at derailing a peace settlement in the country.

It said a shell hit an inner yard of the embassy complex, while another shell landed near the diplomatic mission. De-mining specialists have been working in the hit area.

According to the statement, the Russian embassy to Syria was “shelled by terrorists” at one 1pm and again almost 20 minutes later.

The ministry said Russia considers “this new provocation by extremists opposing the peaceful settlement in Syria as the confirmation of their intention to continue sowing terror and violence”.

The ministry said there remains a threat to Russians in the territory and that the attack underlines the importance of the “prompt elimination” of extremists in the region.

Russia has called for the international community to condemn the alleged attack.