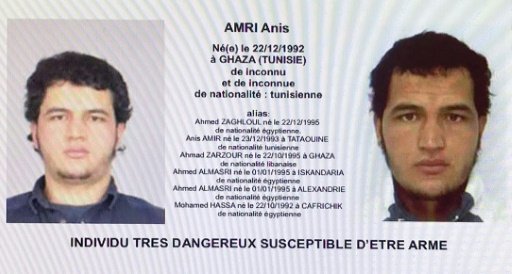 This handout from a computer screen grab shows the arrest warrant for a Tunisian man identified as Anis Amri
Share:
German prosecutors say they are searching for a 24-year-old Tunisian suspect named Anis Amri after finding an identity document in the truck that ploughed into a Berlin Christmas market on Monday, killing 12 people.

The identity document that was found under the truck’s driver’s seat was issued to Anis Amri, born in Tunisia in 1992. A European arrest warrant issued by Germany and obtained by The Associated Press indicates that he has used at least six different aliases and has claimed Egyptian and Lebanese citizenship at various times as well.

German Interior Minister Thomas de Maiziere said Wednesday that authorities had identified the new suspect but still did not know for sure whether he was the man behind the attack.

“There is a new suspect we are searching for – he is a suspect but not necessarily the assailant,” the minister told reporters.

A spokesperson for Tunisia’s foreign ministry said it was trying to verify the individual’s information.

The interior minister of North Rhine-Westphalia state, Ralf Jaeger, said security agencies had “exchanged information about this person” previously in relation to counterterrorism investigations, including as recently as November.

Jaeger told reporters on Wednesday that state police had launched proceedings against the man on the suspicion that he was planning a serious crime.

Authorities had tried to determine whether he was planning a robbery to fund the purchase of automatic weapons for a possible attack with accomplices, a judicial source in Berlin told Reuters.

The pre-Christmas carnage at a symbolic Berlin site – under the ruined spire of a church bombed during World War II – has shocked Germans and prompted security reviews across Europe, already on high alert after attacks this year in Belgium and France.

The unconfirmed reports that an asylum seeker may have been behind the attack has revived a bitter debate about security and immigration, with Chancellor Angela Merkel facing calls to clamp down after allowing more than a million newcomers into Germany in the past two years.

Merkel, who will run for a fourth term next year, has said it would be particularly repulsive if a refugee seeking protection in Germany was the perpetrator.

Police initially arrested a Pakistani asylum-seeker near the scene, but released him without charge on Tuesday. Authorities have warned that the attacker is on the run and may be armed. It is not clear if the perpetrator was acting alone or with others.

The 25-tonne truck, belonging to a Polish freight company, smashed into wooden huts selling Christmas gifts and serving mulled wine and sausages, killing 12 people and injuring about 45 others.

The Polish driver of the hijacked truck was found shot dead in the cabin of the vehicle.

Media reports said there appeared to have been a struggle and the attacker may also have been injured.

Islamic State has claimed responsibility for the attack, as it did for a similar incident in the French city of Nice in July when a Tunisian-born man rammed a truck through a crowd celebrating Bastille Day. Eighty-six people were killed before the driver was shot dead by police.

Police arrested another suspect in the early hours of Wednesday morning but later released him, media reports said.

“We want to raise the police presence and strengthen the protection of Christmas markets. We will have more patrols. Officers will have machine guns. We want to make access to markets more difficult, with vehicles parked across them,” Bouillon told the paper.

Some politicians have blamed Merkel’s open-door migrant policy for making such attacks more likely. The anti-immigrant Alternative for Germany (AfD), which has gained support in the last two years as the chancellor’s popularity has waned, said on Tuesday that Germany is no longer safe.

Bavarian Interior Minister Joachim Herrmann told German radio there was a higher risk of Islamist attacks because of the influx of migrants over the past two years, many of whom have fled countries such as Syria, Iraq and Afghanistan.

The task of tracking the suspects and the movements of the truck may be complicated by the relative scarcity of security cameras in public places in Germany, compared with countries like Britain.

The German cabinet on Wednesday approved a draft law to broaden video surveillance in public and commercial areas, a move agreed by parties last month after a spate of violent attacks and sexual assaults on women.

State surveillance is a particularly sensitive issue in Germany because of the extensive snooping carried out by the Stasi secret police in communist East Germany and by the Gestapo during the Nazi era.