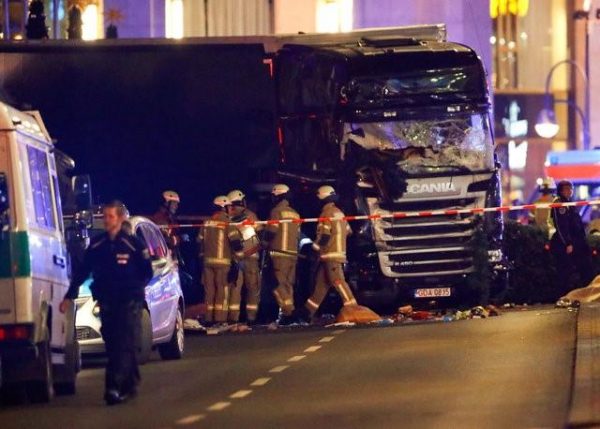 Police and emergency workers stand next to a crashed truck at the site of an accident at a Christmas market on Breitscheidplatz square near the fashionable Kurfuerstendamm avenue in the west of Berlin, Germany, December 19, 2016. REUTERS/Fabrizio Bensch
Share:
A truck plowed into a crowded Christmas market in the German capital Berlin on Monday evening, killing nine people and injuring up to 50 others, police said.

German media, citing police at the scene, said first indications pointed to an attack on the market, situated at the foot of the ruined Kaiser Wilhelm memorial church, which was kept as a bombed-out ruin after World War Two.

The incident evoked memories of an attack in France in July when Tunisian-born man drove a 19-tonne truck along the beach front, mowing down people who had gathered to watch the fireworks on Bastille Day, killing 86 people. The attack was claimed by Islamic State.

The truck careered into the Berlin market at what would have been one of the most crowded times for the Christmas market, when adults and children would be gathering in the traditional cluster of wooden huts that sell food and Christmas goods.

“I heard a big noise and then I moved on the Christmas market and saw much chaos…many injured people,” Jan Hollitzer, deputy editor in chief of Berliner Morgenpost, told CNN.

“It was really traumatic.”

Police cars and ambulances converged quickly on the scene as a huge security operation unfolded. The fate of the driver of the truck was not immediately clear, but Bild newspaper said he was on the run.

Emma Rushton, a tourist visiting Berlin, told CNN the truck seemed to be traveling at about 40 mph (65 Kmh).

Asked how many were injured, she said that as she walked back to her hotel, she saw at least 10.

Julian Reichelt, editor in chief of Bild Berlin, said that there was currently a massive security operation under way.

“The scene certainly looks like a reminder of what we have seen in Nice,” Reichelt said,