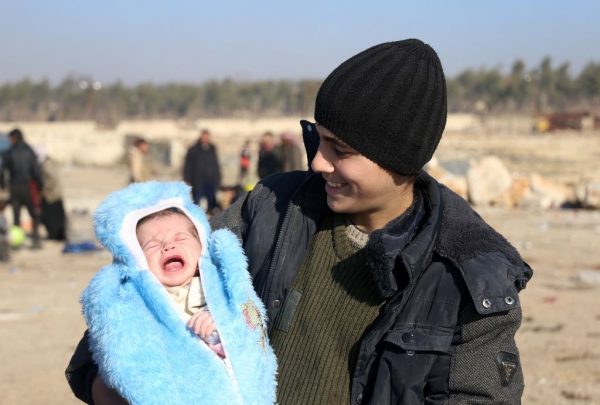 By: Karam al-Masri with Maya Gebeily
Beirut , Lebanon- Thousands of traumatised Syrians left the rebel enclave of Aleppo on Monday as the UN Security Council voted to deploy observers to the battered city to monitor the evacuations.

Families had spent hours waiting in below-freezing temperatures, sheltering from the rain in bombed-out apartment blocks and waiting desperately for news on a new wave of departures.

After an agonising delay, the operation resumed on Monday under a complex agreement that will see regime forces exert full control over Syria’s second city.

Around 5,000 people travelled in 75 buses out of Aleppo on Monday, said Ingy Sedky, spokeswoman for the International Committee of the Red Cross (ICRC).

They crossed the front line headed for rebel-held territory elsewhere in northern Syria, after around 350 other people got out during the night.

“We will continue throughout the day — and however long it takes — to evacuate the thousands more who are still waiting,” Sedky told AFP.

Ahmad al-Dbis, who heads a team of doctors and volunteers coordinating evacuations, saw dozens of buses and ambulances arrive at the staging ground west of Aleppo.

He said they were in “a very bad state after waiting for more than 16 hours” at a regime checkpoint without being allowed off the buses.

The government had suspended evacuations on Friday, insisting that people also be allowed to leave two northwestern villages under rebel siege.

According to the ICRC and the Syrian Observatory for Human Rights, around 500 people left in a dawn convoy out of Fuaa and Kafraya.

The Observatory said at least 14,000 people, including 4,000 rebels, have left the opposition sector since the evacuations began on Thursday.

At least 7,000 remain, according to the Britain-based monitor.

A rebel representative said that hundreds of people would also be evacuated from Zabadani and Madaya, two army-besieged rebel towns near the border with Lebanon, as part of the deal.

Dbis said the latest evacuees from Aleppo were in a “terrible state” after their departure was delayed for hours in temperatures well below freezing, compounding their plight from months of siege and bombardment by the army.

“They hadn’t eaten, they had nothing to drink, the children had caught colds, they were not even able to go to the toilet,” he told AFP.

He described families wrapped in several layers of coats getting off the buses, which then headed back to Aleppo to bring out more.

A young boy bit into an apple as aid workers distributed bottled water to his family.

The Humanitarian Relief Foundation (IHH), a Turkish NGO working in Syria, said Bana was likely to be transferred to a displacement camp in the northwest province of Idlib.

“The people we are welcoming have been through hell — the level of trauma they have experienced is impossible to describe or comprehend,” said Casey Harrity of the international NGO Mercy Corps.

Residents of east Aleppo — a rebel bastion since 2012 — had lived under four months of suffocating siege when Syria’s army began its blistering assault in mid-November to retake the whole city.

In an 11th-hour deal, regime ally Moscow and rebel supporter Ankara agreed on the evacuation of thousands of civilians and fighters from the last remaining opposition-held pocket in Aleppo.

Moscow, which has carried out an air war in support of the Damascus regime since September last year, had threatened to veto a UN Security Council draft resolution calling for monitors to oversee the protection of civilians.

But on Monday, the council unanimously adopted the French-drafted resolution in the first show of unity in months among world powers grappling with the crisis in Syria.

The measure tasks the United Nations with carrying out “adequate, neutral monitoring and direct observation on evacuations from eastern Aleppo and other districts of the city”.

It remained uncertain, however, whether the Syrian government would give the observers access to the city and allow operations there to come under international scrutiny.

Iran’s official news agency IRNA said the foreign ministers of Russia, Turkey and Iran would meet in Moscow on Tuesday to discuss the situation.

Russia said on Monday that the defence ministers from the three countries would also meet in Moscow on Tuesday.
AFP