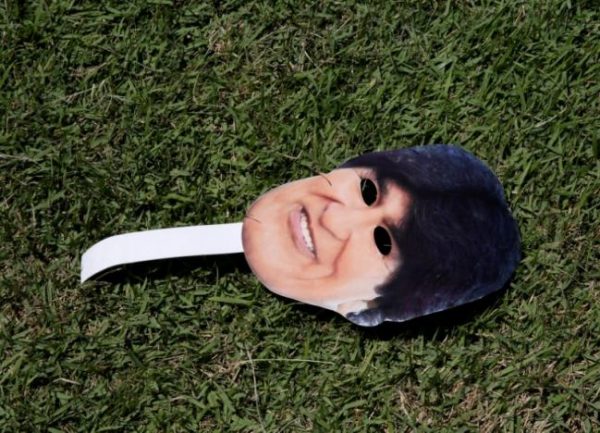 A mask of Bolivia’s President Evo Morales is seen during a Democratic and Cultural revolution celebration at a stadium in Ivirgarzama in the Chapare region, Bolivia December 18, 2016 .REUTERS/David Mercado
Share:

Bolivian President Evo Morales said on Sunday he may run for a fourth consecutive term in elections in 2019 despite losing a referendum in February that would have reformed the country’s constitution to allow him to run again.

Morales, a leftist who took office in 2006, was elected to a third term in 2014. He is Bolivia’s first indigenous president and a key ally of Venezuela, whose socialist government has lost allies in the region as countries like Argentina have moved to the right.

“If the people say Evo Morales, I will stay with the people to continue guaranteeing this democratic and cultural revolution,” Morales told a rally for his Movement to Socialism party. “We aren’t renters. As social movements, we have come to the presidential palace to stay for all our lives.”

Bolivia’s constitution allows for presidents to serve two consecutive terms, although courts have decided that Morales’ first term, from 2006 to 2010, does not count because the country adapted a new constitution in 2009.

Morales, 57, accepted the results of the February referendum, in which 51.3 percent of voters voted against changing the constitution to allow him to run for a new term, but blamed the loss on a smear campaign by the right-wing opposition.

To allow Morales to run despite the referendum loss, the country could hold a new referendum, or the legislature – controlled by his party – could approve a new constitutional referendum with a two-thirds vote. Morales could also resign six months before the end of his term to run again.

The landlocked Andean country has vast reserves of natural gas, and its economy is largely dependent on natural gas and mineral exports.
REUTERS