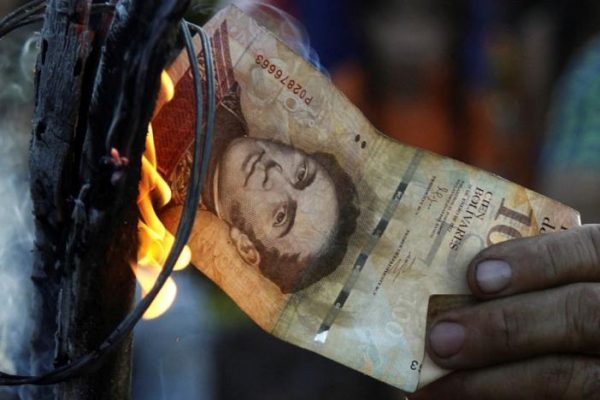 A man burns a 100-bolivar bill during a protest in El Pinal, Venezuela December 16, 2016. REUTERS/Carlos Eduardo Ramirez
Share:
By Anggy Polanco
SAN CRISTOBAL, VENEZUELA- Hundreds of Venezuelans jumped barriers to defy their government’s closure of the Colombian border on Saturday while looting and protests continued due to a cash shortage, causing pre-Christmas chaos.
The unrest began on Friday following this week’s surprise pulling from circulation of Venezuela’s largest denomination note, 100 bolivars, before replacement bills were available.

The move left Venezuelans flooding banks to deposit or swap their 100-bolivar bills within a short deadline, and many without the means to pay for food, gasoline or Christmas preparations in a country already reeling from a deep economic crisis.

About 40 percent of Venezuelans do not have bank accounts.

In the southern mining town of El Callao, where many shops were looted according to locals, a 14-year-old boy died, authorities confirmed on Saturday. An opposition legislator reported three people had perished in unrest there on Friday.

The Democratic Unity opposition coalition said socialist President Nicolas Maduro should resign for incompetence and for inflicting yet more suffering on Venezuelans.

Maduro, however, said opponents were stirring violence and justified the 100 bolivar measure as a way of strangling mafia and smugglers on the border with Colombia.

He has closed crossings with Colombia and Brazil.

Near San Cristobal city, about 400 people surged over the border into Colombia in search of food and medicines, which are scarce in Venezuela, witnesses said. “We jumped over the fences,” said 41-year-old Claudia Perez.

In southern Bolivar state, people broke into dozens of shops and warehouses in various towns, witnesses and business leaders said. Authorities declared a curfew in Ciudad Bolivar and the state governor said 135 people had been arrested.

Addressing thousands of supporters at a rally in Caracas, Maduro said new currency notes should be reaching Venezuela and entering circulation soon, despite what he called an “international sabotage” operation to prevent that.

He gave no further details of that accusation.

The 54-year-old successor to Hugo Chavez, whose popularity has plunged during three years of recession, says political foes are sabotaging the economy to undermine his rule.

Some members of the Justice First and Popular Will parties were arrested for colluding with mafias, he said.

Critics say it is time for Maduro to go after 18 years of socialist policies have wrecked the economy. But authorities have stymied an opposition push for a referendum to remove him before the next presidential election due in late 2018.