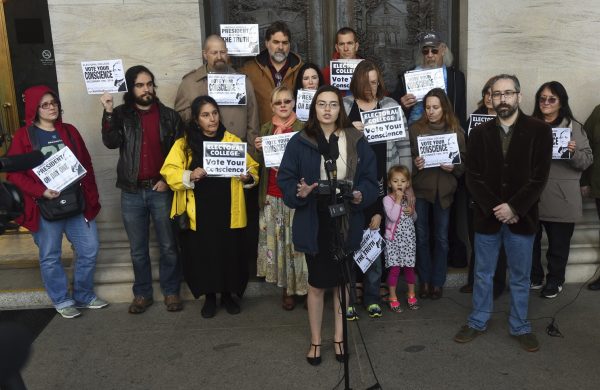 Washington state elector Levi Guerra, center, at a Nov. 30 news conference calls for members of the electoral college to vote for a Republican “consensus candidate” rather than Donald Trump. (Steve Bloom/AP)
Share:
Pressure on members of the electoral college to select someone other than Donald Trump has grown dramatically — and noisily — in recent weeks, causing some to waver but yielding little evidence that Trump will fall short when electors convene in most state capitals Monday to cast their votes.

Carole Joyce of Arizona expected her role as a GOP elector to be pretty simple: She would meet the others in Phoenix and carry out a vote for Trump, who won the most votes in her state and whom she personally supported.

But then came the mail and the emails and the phone calls — first hundreds, then thousands of voters worrying that Trump’s impulsive nature would lead the country into another war.

“Honestly, it had an impact,” said Joyce, a 72-year-old Republican state committee member. “I’ve seen enough funerals. I’m tired of hearing bagpipes. . . . But I signed a loyalty pledge. And that matters.”

Such is the life these days for many of the 538 men and women who are scheduled to meet Monday across the country to carry out what has traditionally been a perfunctory vote after most every presidential election.

The role of elector has intensified this year, in the wake of a bitter election in which Trump lost the popular vote to Democrat Hillary Clinton by a margin of nearly 3 million votes and the revelation of a secret CIA assessment that Russia interfered to help Trump get elected.

Amid the uncertainty caused by Russian influence, 10 electors — nine Democrats and one Republican — asked for an intelligence briefing to get more information about Moscow’s role. Their request was endorsed by John Podesta, Clinton’s campaign manager.

“The administration should brief members of the electoral college on the extent and manner of Russia’s interference in our election before they vote on Dec. 19,” Podesta wrote Thursday in a Washington Post op-ed.

The Office of the Director of National Intelligence said Friday evening that it would not brief the electors, because it is engaged in a presidentially ordered review of the Russian interference. “Once the review is complete in the coming weeks, the intelligence community stands ready to brief Congress” and may release findings, the ODNI said in a statement posted to its website.

Meanwhile, Joyce and the other 305 Republican electors who are supposed to cast their votes for Trump have been subject to intense campaigns orchestrated by anti-Trump forces to convince them that they alone can block the reality-television star from the White House.

Others have targeted Democratic electors, who are supposed to cast votes for Clinton, to persuade them to switch to a more conventional Republican who could also draw enough support from GOP electors to swoop into office.

While there is little sign the efforts will prove successful, the push has unleashed intense pressure on individual electors, who have now been thrust into a sometimes uncomfortable spotlight.

Joyce has received emails from “Benjamin Franklin” and “John Jay” — and a Christmas card that read: “Please, in the name of God, don’t vote for Trump.”

The rancor about the role of electors started early in the campaign. In August, Baoky Vu, a GOP activist in Atlanta, said he planned to resign from the job because he was so morally opposed to Trump. He planned to defer his voting responsibility to someone more willing — an alternate who would be put in place Monday.

After the election, Vu started getting phone calls and emails asking him not to resign. He was asked instead to consider joining a coalition of electors hoping to vote against Trump. He declined.

“I don’t think we should drag this election out any longer,” Vu said. “And can you imagine if the electors overturned the results? If we attempt to change them in any way, you’ve got these far-right elements that are just going to go haywire.”

Mark Hersch, a 60-year-old Chicago-based marketing strategist, joined a group known as the Hamilton Electors, who have been organizing efforts to contact electors and change their minds. Before the election, Hersch said, the most political activism he had ever undertaken was planting a yard sign.

He said he believes the goal to deny Trump seems reachable if not probable. Rather than persuade an entire country, he and his allies must find 37 Republicans willing to vote for someone else, a tipping point at which the responsibility of picking the president would shift to the U.S. House of Representatives. No one knows for sure how many are considering alternate votes; estimates vary from one to 25.

The GOP-controlled House could vote for Trump anyway, but those trying to flip voters say there is still value in taking a stand. Hersch said he was inspired to continue to flip electors by the movie “300,” which depicts an ancient Spartan army’s stand against a Persian force that outnumbered it 1,000 to 1.

“I would like to think we would be successful, but if not, we need to do all we could to prevent this man from being president,” he said. Then he modified a line from the movie: “Prepare your breakfast, and eat hearty, for tonight, we will go to battle. This isn’t 300, but 538.”

That “battle” has intensified as electors draw closer to their convening Monday. Joyce was getting 15 letters a day and 300 emails in the days after Nov. 8, but those numbers quickly increased to 50 and 3,000. Some of them have been form letters, others handwritten.

The letters came from Washington state and from China, stuffed with copies of the U.S. Constitution or Alexander Hamilton’s writing in Federalist Paper No. 68, which states that the meeting of the electoral college “affords a moral certainty, that the office of President will never fall to the lot of any man who is not in an eminent degree endowed with the requisite qualifications.”

On Thursday, Joyce received so many letters that the letter carrier just gave her a U.S. Postal Service bucket filled to the brim.

“I’m sorry this is happening to you,” Joyce recalled the letter carrier saying. While some electors have complained of harassment, Joyce shrugged off the mail and placed it all on a sofa decorated with American flag pillows.

“This is America,” she said in a phone interview. “People have a right to say what they want.” She said most of the messages were thoughtful.

On Friday, she said, her emails became more positive. The messages were from Republicans, thanking her for taking Trump to the finish line of an arduous process.

“How refreshing!” she said.

Although some Democrats (who have in the past five presidential elections lost two in which they won the popular vote) and even Trump himself have questioned the necessity of the electoral college, many opposing Trump have said this election proves just how important it is.

Norman Eisen, a former ambassador to the Czech Republic who served as legal counsel to both the Bush and Obama administrations, began calling electors to explain that their job is not necessarily to certify the results but to have a reasonable discussion over whether the public made the right decision.

For instance, Eisen, who focused on government ethics in Obama’s White House, noted that Trump could be violating a clause in the Constitution that prevents presidents from receiving gifts and funds from foreign governments; it is unclear whether his businesses do because he has not publicly disclosed his tax returns.

In Massachusetts, Republican operative and attorney R.J. Lyman said he didn’t want to harass anyone, so he used his connections to find electors who were willing to chat about the lessons he learned in American history class and at the dinner table. He became one of the few people in the country more willing to talk about Hamilton the man than about “Hamilton: An American Musical.”

The electoral college, he said he tells them, was “not intended to be a rubber stamp.” Otherwise, he said, the Founding Fathers would have tasked the responsibility to a clerk or simply used the popular vote as a way of choosing a president.

“I’m reminding them of their duty to think about their choice in a way that’s consistent with their conscience and the Constitution,” Lyman said.

So far, Lyman said, he has identified 20 electors who might be willing to vote “other than their party pledge.” He couldn’t name more than one publicly but insisted that more were out there.

Earlier this month, Chris ­Suprun of Texas became the first Republican elector in a red state that voted for Trump to declare, in a Dec. 5 New York Times column, that he would not cast his electoral vote for Trump. Suprun voted for Sen. Ted Cruz of Texas in the primary and said he left behind his wallet on Election Day and thus did not vote in the general.

Nonetheless, Suprun said, he was willing to vote for Trump in the electoral college until the candidate claimed with no evidence that millions of Clinton supporters voted illegally.

“As of yesterday, people are calling to say, ‘Get your ass together, or we’re coming for you,’ ” said Suprun, who was the sole Republican elector to ask for an intelligence briefing on Russia. “They are doing it with their own phone number, not even blocking the number. That’s not been surprising — look at what Trump says himself.”

Vinz Koller, a Democratic elector from Monterey County, Calif., said he read Suprun’s column and started thinking about his own role in the college. It inspired him to support a new theory: If he could persuade other Democrats to abandon their Clinton votes, perhaps he and Republicans could agree on a more conventional choice — a la Ohio governor and failed GOP candidate John Kasich — to vote for instead of Trump.

The plan seemed unlikely, he said, but Trump’s candidacy unsettled him so much that he felt he needed to try anything. California is one of 29 states that mandate electors vote for the candidate who won the state, so Koller sued to continue his plan.

“Frankly, this is hard and not something I do lightly,” he said. “I’ve been working in partisan politics a long time, and I don’t like voting against my candidate, but I never thought that the country might be unstable until now.”

On Thursday evening, he found himself in the Library of Congress. Strolling through its stacks, Koller sought a librarian with one request: Can I see the original Federalist Papers?

He looked to see Federalist No. 68, written by Hamilton to describe the need for the electoral college.

“We have been getting a civic lesson we weren’t prepared to get,” Koller said. “They gave us the fail-safe emergency brake, in case the people got it wrong. And here we are, 200 years later. It’s the last shot we have.”