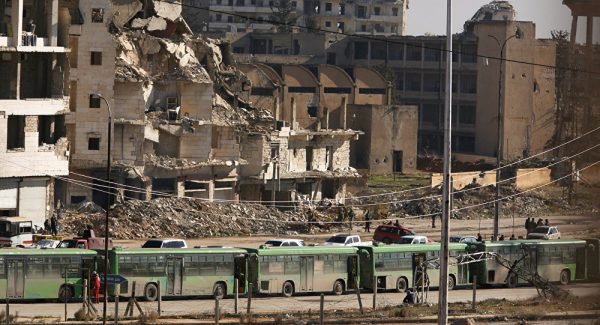 Buses are seen during the evacuation of rebel fighters and their families from rebel-held neighbourhoods in the embattled city of Aleppo on December 15.
Share:
Buses and ambulances began evacuating people from the last pocket of rebel-held territory in eastern Aleppo as part of a fragile ceasefire deal on Thursday, a day after a similar agreement fell through.

A long line of green buses was shown on Syrian state television entering the rebel sector, while witnesses in the stricken city said ambulances were also on the move.

AFP and Reuters reporters at the scene said around two dozen vehicles carrying the first evacuees had left the rebel enclave en route to rebel-held territory in the west of Aleppo province.

State TV said some 4,000 rebels and their families would be evacuated as part of a ceasefire deal reached overnight, which came a day after a similar agreement, brokered by Russia and Turkey, fell through amid renewed fighting.


Russia’s defence ministry, which backs Syrian President Bashar al-Assad, said it was coordinating the evacuation of the remaining rebels with Syrian authorities.

“On the order of Russian President Vladimir Putin, the Russian ceasefire monitoring centre, in cooperation with Syrian authorities, is preparing the evacuation of the remaining rebels and members of their families from the eastern neighbourhoods of Aleppo,” a ministry statement said.

The rebels would be evacuated toward the northwestern Syrian city of Idlib in 20 buses and 10 ambulances, it said.

The International Committee of the Red Cross confirmed its staff arrived together with the Syrian Arab Red Cross to evacuate 200 wounded people from the enclave, some in critical condition.

Witnesses and reporters in the besieged city said guns had fallen silent in the early hours of the morning amid preparations for the evacuation.

But the White Helmets civil defence group tweeted that one senior volunteer had been shot and injured while clearing an evacuation route for ambulances.

And an ambulance service official in eastern Aleppo said a departing convoy of ambulances had been shot at, with three people injured. An opposition source told the BBC the convoy had headed back to eastern Aleppo.

Separately – but in a key addendum to the deal – Syria state TV said 29 buses and ambulances were heading to two Shiite villages besieged by rebels to evacuate those critically ill.

The Syrian Observatory for Human Rights, a Britain-based monitor, said the evacuees were expected to go to the government stronghold of Latakia province.

“The deal is linked to the evacuation happening in Aleppo,” said the Observatory’s director Rami Abdulrahman.

A first evacuation deal for Aleppo, brokered by Russia and Turkey, was held up on Wednesday over last-minute demands by Syrian government allies to evacuate the sick from the two villages in Hama province.

Cold and hungry civilians who had gathered before dawn to evacuate eastern Aleppo were instead plunged back into a familiar nightmare as violence erupted.

Panicked civilians ran for cover as booms from air strikes and artillery fire rang out in the east of the former commercial hub, scene of some of the worst fighting in Syria’s protracted war.

The Observatory reported “very intense clashes on every front line” and said at least two people had been killed in rebel areas.

Former al Qaeda affiliate Fateh al-Sham Front said Wednesday that one of its suicide bombers detonated a car bomb at a regime position in southern Aleppo.

Syria’s army has pressed a month-long assault that has seen it take more than 90 percent of the former rebel stronghold in east Aleppo.

The evacuation agreement came amid international concern about the plight of civilians in the city, and as the UN said it had reports of atrocities being committed by advancing government forces.

The UN said Tuesday it had credible reports of at least 82 civilians, including 11 women and 13 children, being executed in recent days.

And the UN’s Commission of Inquiry for Syria said it had received reports opposition fighters were blocking civilians from fleeing Aleppo and using them as human shields.

Aleppo, a cultural and economic hub second only to Damascus in importance, had been split between a rebel-controlled east and government-held west since 2012.

It was unclear how many civilians remained in rebel territory, after an estimated 130,000 fled to other parts of Aleppo during the government advance from mid-November.

More than 465 civilians, including 62 children, have died in east Aleppo during the assault, the Observatory said Wednesday in a new toll.

Another 142 civilians, among them 42 children, have been killed by rebel rocket fire on government-held zones in the same period, the monitor said.

Syria’s conflict has evolved from anti-Assad protests into a multi-front war that has killed more than 312,000 and drawn in world powers on all sides of the war.