The final goodbyes from Aleppo, the city under siege. “Stop the genocide” one message read 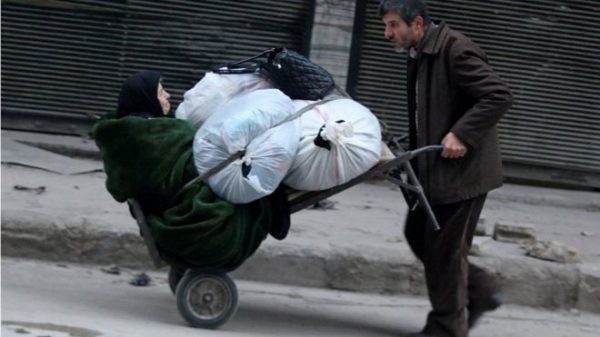 A man pushes a cart with an elderly woman deeper into one of the few remaining rebel-held areas of Aleppo
Share:

As the battle for Aleppo heads towards a conclusion, people trapped in a small area of east Aleppo still held by the rebels have been sending harrowing messages with their final goodbyes.

As the bombing by Syrian government forces intensified, the calls for help from those trapped in rebel-territory have grown more desperate.

Lina, an activist tweeting last night, makes this desperate plea: “Humans all over the world, don’t sleep! You can do something, protest now! Stop the genocide”.

Others appear to have given up hope, posting messages as bombs fall around them.

One man says it is the last video he will post. “We are tired of talking, we are tired of speeches. No one listens, no one responds. Here comes the barrel bomb. This is the video’s ending.”

As he signs off, a bomb explodes nearby.

And waking up on Tuesday morning, still alive, Monther Etaky writes: “I still here [sic], facing the genocide with my special friends without any comments from the world.”

But the threat of imminent death is still here. “I hope I could broadcast our live death to you,” he says bitterly.

Bana Alabed, the seven-year-old girl who has been tweeting from an account managed by her mother, wrote a heart-breaking message on Tuesday morning.

“I am talking to the world now live from East #Aleppo. This is my last moment to either live or die.”

Earlier, she tweeted “Final message. People are dying since last night. I am very surprised I am tweeting right now and still alive.”

And a few hours later: “My dad is injured now. I am crying.”

It is obvious from many messages that Aleppo is under its worst bombardment yet.

“It’s hell”, says a tweet by the White Helmets – a Syrian volunteer group which has been working in East Aleppo – in a harrowing message from late on Monday.

“…All streets & destroyed buildings are full with dead bodies”.

Descriptions of the situation in Aleppo all paint Armageddon-like scenes. Abdul Kafi Alhamado, an English teacher inside one of the remaining rebel-held areas of Aleppo said it felt like “Doomsday” as government forces advanced.

“Bombs are everywhere. People are running, they don’t know where, just running. People are injured in the streets. No-one can go to help them,” he told BBC News.

Some were only able to send the BBC text messages. One father in the city wrote: “Guess it’s goodbye. Thanks all who stand for us and pay for us. But it’s almost over and they are just hours away of killing us.”

And another father, whom the BBC has regularly spoken to over the past year, tweeted this: “The last massage. Thanks for everything. We shared many moments. These are last tweets from an emotional father. Farewell, Aleppo.”