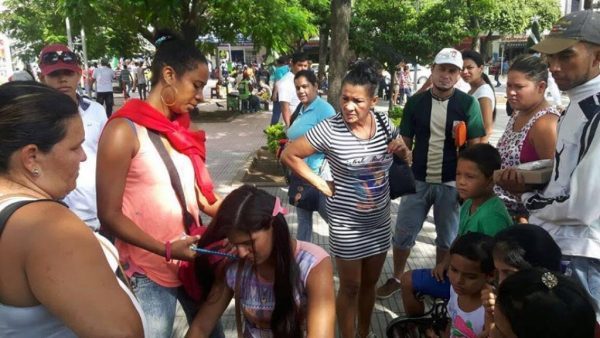 Venezuelan women sell their hair to buy food as economic crisis worsens
Share:
People in Venezuela are doing whatever they can to make ends meet as an economic crisis continues to ravage their country. They are even selling their hair. Our Observers say that, for the past three months, hundreds of Venezuelan women have been lining up at the border each day to sell their hair illegally in neighbouring Colombia. Most of these women use the pesos they earn to buy necessities like food and medicine.

For more than a year, Venezuelans have been facing a difficult “new normal” as their country struggles through an economic crisis that has led to widespread shortages. For some, that means lining up for hours in front of stores. Others have started crossing the border to buy supplies in Colombia. Others have started scavenging food from trash cans. When faced with empty store shelves and sky-high prices for basic goods, Venezuelans are coping in any way they can.

The new illegal trade of selling hair has sprung up in the border state of Tachira since September. Every day, hundreds of Venezuelan women cross the border into Colombia to sacrifice their hair for a little money.

Our Observer Nestor Solano is the general coordinator for the movement “Voluntario Tachirense por el Cambio” [Tachira volunteers for change], a group that unites local activists opposed to Venezuelan president Nicolas Maduro. Solano brought the development of the illegal cross-border hair trade to the attention of local media.

I often travel between the two countries and, for the past three months, I’ve noticed a huge increase in the illegal hair trade. Every day, women arrive by bus — some of them from other states in Venezuela — and cross the border into Colombia. There, they get their hair cut by one of the many “hairdressers” who’ve set up shop on the sidewalks or in parks. The “hairdressers” also estimate how much the hair is worth, which depends on its length, its volume and if the hair is natural or has been dyed.

Then, the women sell their hair to hawkers. You can see them walking through the streets crying out, “We buy hair!” There is a huge concentration of them in the Colombian border town Cucuta.

A woman can sell her hair for up to 70,000 Colombian pesos [about 20 euros], which is more than a month’s salary at minimum wage in Venezuela. Most women use the money to buy basic goods. The smugglers who buy the hair then sell it to wig-making businesses in the centre of the country.

“It’s the first step towards much more dangerous illegal trade”

The illegal hair trade is a new development, though. Since the crisis hit, Venezuelans have been crossing the border to sell their belongings, especially televisions, which are then sold at cut-rate prices in Colombia.

But the hair trade is different because it involves selling something physical. It’s shocking for several reasons. First, because it’s humiliating and degrading for women to have to sell their hair to eat. It’s also disturbing because it is the first step towards much more dangerous trafficking. When women don’t have any hair left or any more television sets, then what will they sell? Their organs?

Will we start seeing hair theft? [Editor’s note: In 2015, in the coastal Venezuelan city of Maracaibo, there was an increase in reports of women being attacked and having their hair cut off]. To my knowledge, this hasn’t happened yet. But we have to stay vigilant.
Oscar Gerardino, the secretary of the government for the Colombian city of Cucuta, was interviewed by one of our Observers, a journalist, for the local news site, Cucuta Online. Gerardino said the government was facing a difficult-to-manage situation with close to “50,000 Venezuelans coming to Cucuta daily”, including many women who sell their hair “even though this practice is illegal in Colombia”. He also said that the government, working with the national police, has carried out several operations to stop this illegal trade. They have arrested hair traffickers and have also called on the Colombians who resell the contraband hair to stop “taking advantage of the economic situation in Venezuela”.

On December 2, Venezuelan president Nicolas Maduro blamed the inflation sweeping the country on “right wing fascists aligned with Colombian mafias”. He said that these groups were carrying out “operations from a base in Cucuta” to leave Venezuela “without money”.

From August 2015 to August 2016, the border between Venezuela and Colombia was closed on Maduro’s orders in an effort to combat both insecurity and the flow of contraband goods. Last July, hundreds of women defied authorities and crossed the border in a bid to buy products no longer available in Venezuela. There was widespread rejoicing when borders were reopened.

Venezuela was dependent on the petrol sector (which accounted for 96% of its exports). The fall in crude oil prices plunged the country into an unprecedented financial crisis. Inflation is expected to have reached 475% in 2016, according to the IMF. In 2017, the IMF estimated that Venezuela’s inflation rate could reach a startling 1,600%.