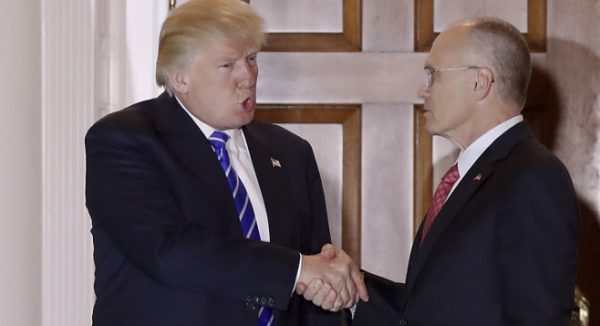 The war between Donald Trump and the nation’s labor unions is on.

Labor leaders, who spent tens of millions of dollars campaigning against Trump, said after the election they’d give him a chance to deliver on his pro-worker agenda. But the cease-fire eroded in just the past 24 hours.

First, Trump blasted an Indiana union boss personally on Twitter, prompting a blistering response from labor leaders. Then he announced his choice for secretary of the Department of Labor is fast-food executive Andrew Puzder, a union critic who’s even floated the idea of automating his restaurants to avoid worker costs.

“It’s part of a larger agenda, and you can see it playing out in terms of his picks, which is to destroy the labor movement,” said RoseAnn DeMoro, executive director of National Nurses United. “They want to do away with democracy. That’s the problem. Labor is a check on the balance of power with corporations and they want labor out of the way.”

The emerging battle could set the tone between Trump and unions — and affect the future of the U.S. labor movement itself. Trump won the election with the help of union household voters in key states, such as Ohio and Michigan. In the soul searching after the election, labor needed to decide whether to stand with or against him.

So far, Trump is making that decision easy. The president-elect seems to be assembling a pro-business Cabinet that could clash with unions at every turn.

Puzder would fit right in. He’s the top executive of CKE Restaurants, the parent company for Carl’s Jr., Hardee’s and Green Burrito. While he doesn’t oppose raising the minimum wage, he says it will lead to job losses and more automation.

Randi Weingarten, president of the American Federation of Teachers, said Trump’s plan to nominate Puzder “makes a mockery of what the Department of Labor is about.”

Weingarten has been deeply critical of another Cabinet pick, Betsy DeVos, a billionaire businesswoman he plans to tap for secretary of Education who supports expanding charter and other private school options for low-income children.

“Somebody like Andrew Puzder earns in one day what the workers in his stores earn in a year,” Henry said. “The absolute economic inequality that he represents is the actual thing that we’ve counted on the Labor Department to stand against.”

Trump’s war with unions isn’t just reflected in his Cabinet picks. The two factions have battled in recent days over the president-elect’s deal to keep jobs at a Carrier air conditioner manufacturing plant in Indianapolis from moving to Mexico.

The saga began when Trump announced last week that 1,100 jobs would remain in Indiana. Chuck Jones, president of United Steelworkers 1999, later realized that only 800 of the jobs slated to move would be preserved. “For whatever reason, lied his a– off,” Jones told the Washington Post.

In response, Trump called out Jones on Twitter and said he “has done a terrible job representing workers” in the local union. “If United Steelworkers 1999 was any good, they would have kept those jobs in Indiana,” Trump tweeted. “Spend more time working-less time talking. Reduce dues.”

Union leaders rushed to defend Jones on Thursday. Randi Weingarten called Trump a “big bully” and lauded Jones. “Frankly, Mr. Trump has been buying steel from China,” she said. “Chuck Jones is a hero, he’s not the problem.”

Richard Trumka, president of the AFL-CIO, called Jones a “man of passion, conviction and integrity” in a statement and said “an attack on him is an attack on all working people.” Union supporters brandished an #ImWithChuck hashtag on Twitter, too.

Larry Cohen, former president of the Communications Workers of America, said the idea that Trump would attack someone like Jones was “repulsive” and that Jones is “totally dedicated to his members and to his community.”

In a broader sense, the early moves by the president-elect suggest he will be hostile toward labor groups, said DeMoro of National Nurses United.

“It portends what is to come,” she said.