Republican elector vows to vote against Trump. “Not qualified” for office, he says 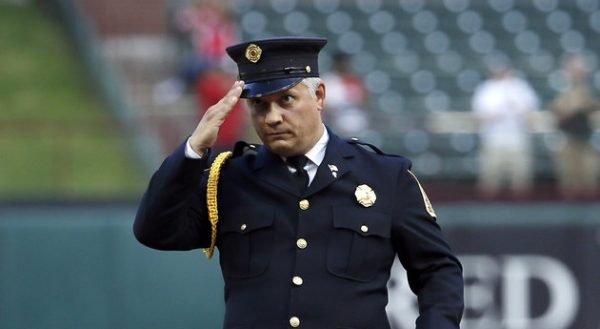 Firefighter Christopher Suprun salutes fans as they cheer, before throwing out the ceremonial first pitch at a baseball game between the Oakland Athletics and the Texas Rangers on Friday, Sept. 11, 2015, in Arlington, Texas. Suprun responded to the attack at the Pentagon on Sept. 11, 2011. (AP Photo/Tony Gutierrez)
Share:
A Republican member of the Electoral College from Texas has promised to vote against Donald Trump during the college’s meeting Dec. 19, saying the president-elect “shows daily he is not qualified for office.”

In an op-ed published Monday in The New York Times, Christopher Suprun, a paramedic and first responder to the Pentagon on Sept. 11, laid out a lengthy list of concerns about Trump. He called on fellow electors to “do their job” and unify around an “honorable and qualified” alternative such as Ohio. Gov. John Kasich of Ohio.

The Federalist Papers, Suprun wrote, argue that the Electoral College is tasked with ensuring candidates are “qualified, not engaged in demagogy, and independent from foreign influence.” Trump, he said, does not meet these standards, and should therefore be rejected from the White House.

“Mr. Trump,” Suprun wrote, “lacks the foreign policy experience and demeanor needed to be commander in chief … Mr. Trump urged violence against protesters at his rallies during the campaign. He speaks of retribution against his critics.”

Suprun added that he has “poured countless hours” into serving his party, and will continue to do so. “But I owe no debt to a party,” he wrote. “I owe a debt to my children to leave them a nation they can trust.”

With his promise, Suprun becomes the Republican party’s first potential “faithless elector” this presidential election, The Guardian reports. Previously, seven of the nation’s 538 electors ― all Democrats in states won by Hillary Clinton ― had voiced their intent to break their pledge.

To support anti-Trump Electoral College members, Harvard University law professor Larry Lessig announced on Monday he will launch “The Electors Trust,” which will provide free counsel to those seeking to oppose Trump in states where doing so may be illegal, Politico reports. The platform is also intended to help electors gauge whether there’s enough support to prevent Trump from becoming president.

Last week, Art Sisneros, also a Republican elector from Texas, announced he planned to resign from the Electoral College rather than vote for Trump. He said casting his vote for Trump would “bring dishonor to God.”

Trump is expected to receive 306 electoral votes when the college votes on Dec. 19. That means that in addition to Suprun, 36 GOP electors would have to jump ship to drop Trump below the 270 electoral votes needed to win the presidency.

It may be a long shot, but it’s exactly what Suprun is pushing for.

“The election of the next president is not yet a done deal,” he wrote. “Electors of conscience can still do the right thing for the good of the country. Presidential electors have the legal right and a constitutional duty to vote their conscience.”

“Fifteen years ago, I swore an oath to defend my country and Constitution against all enemies, foreign and domestic,” Suprun added. “On Dec. 19, I will do it again.”