Why Trump gets more hype out of 1,000 jobs than Obama does out of 16 million

At least for a moment, ­President-elect Donald Trump appeared to achieve this week what President Obama struggled to do for most of the past eight years: convince Americans that he can fix the economy.

Cheering crowds greeted Trump during his victory lap through the Rust Belt this week following the announcement that the nation’s new negotiator-in-chief had struck a deal with heating and air conditioner manufacturer Carrier to keep a factory in Indiana from moving to Mexico. The agreement affected roughly 1,000 jobs and provided Trump the opportunity to deliver on a powerful campaign promise even before taking office.

The plant is just a sliver compared with the nearly 16 million new jobs generated under Obama as he guided the country out of the worst economic crisis since the Depression. But Obama’s success came in fits and starts, illustrated by graphs and pie charts, driven by the philosophy that strengthening the economy required comprehensive new policies.

Trump’s hype of his first victory, on the other hand, suggests that he will embrace the bully pulpit to push an agenda grounded as much in emotion as economics, if not more.

“I think what he did in Indiana . . . was good theater,” said David Axelrod, head of the Institute of Politics at the University of Chicago and a former senior adviser to Obama. “From an optics standpoint, he profited from it.” 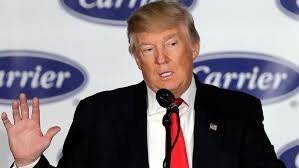 Trump will enter the Oval Office with a significant advantage over his predecessor. New government data released Friday showed that the national unemployment rate dropped to 4.6 percent last month, the lowest level since President George W. Bush sat in the White House in 2007. The economy added 178,000 jobs in November , extending the longest streak of monthly job growth on record.

More-stubborn indicators of the economy’s health, such as wage growth, have finally begun to pick up. Discouraged workers are returning to the labor force. And many of the jobs created over the past two years have been in higher-paying industries.

“It is night and day between the economy we inherited and the one we are passing off,” Deputy Labor Secretary Chris Lu said in an interview.

The painful financial crisis in 2008 forced Obama to spend his first years in office conducting economic triage, including controversial decisions to bail out the nation’s largest banks and rescue the troubled auto industry.

In addition, the recovery from the Great Recession has been excruciatingly slow and uneven. Many workers felt left behind amid broader progress in the economy — a vein of frustration that Trump tapped into during the campaign.

“It was tremendously costly to Obama to have to catch a falling knife, basically,” said Jared Bernstein, senior fellow at the Center for Budget and Policy Priorities and a former economic adviser to Vice President Biden. “Pretty quickly our message became: ‘Things would’ve been worse had it not been for our interventions.’ That’s gotta be one of the hardest messages to try to sell.”

In the final months of his presidency, Obama’s message ­finally appears to be sinking in. A recent Gallup poll shows that his approval rating has jumped over the past two years as job growth picked up and the unemployment rate fell more quickly.

But in an interview with the New York Times early this year, the president acknowledged missed opportunities. “We were moving so fast early on that we couldn’t take victory laps,” he said. “We couldn’t explain everything we were doing.”

Trump, however, displayed his mastery of the victory lap — and domination of the news cycle — over the past week and a half.

He tweeted on Thanksgiving that he was working to save Carrier jobs, and when the deal came together, he visited the factory. Then he flew to Cincinnati for what he dubbed his “Thank You Tour.” There, he called for an end to an “era of economic surrender,” took an obligatory jibe at former president Bill Clinton and his Democratic opponent in the election, Hillary Clinton, for supporting the North American Free Trade Agreement, and pledged to bring more jobs back to the Rust Belt.

He kept up the pressure Friday. After the government’s monthly jobs report was released, his transition team issued a statement highlighting the 4,000 manufacturing jobs lost in November and pointed out that roughly 300,000 have disappeared since Obama took office. It called the deal with Carrier a “preview” of Trump’s agenda.

“I think what this really does is it puts down a marker that they’re going to be willing to pick up the phone and make phone calls and do everything that they can to keep companies here and to keep American jobs here,” Trump spokesman Jason Miller told reporters.

Although the jobs numbers involved in the Carrier deal were small — and saved in part by $7 million in Indiana tax subsidies — they may offer Trump’s voters a sense of validation. And the move could send a message to other corporate executives that if they decide to shift jobs overseas or otherwise thumb their nose at the new administration’s policies, they could draw Trump’s public wrath.

But there are plenty of risks to Trump’s strategy. His economic policy proposals have yet to be fleshed out, and he could face criticism if the robust economy begins to slow under his watch. Companies could also seek to exploit the new spotlight on keeping jobs in the United States, threatening to leave if not given incentives.

Even Trump said this week that he didn’t recall promising to save the jobs at the Carrier plant — and was reminded only when he saw a clip of himself stating just that on television.

For the factory’s workers, the pledge was very real. Taylor Howard, who has worked there for three years, said in an interview in Indianapolis that she had started looking for another job before learning the factory would stay open. She was still wary of the terms Trump may have negotiated but hoped for the best.

“It might be a little bit of a publicity stunt, to tell you the truth,” Howard said. “But if it ends up on the up and up, that’s noble of him.”