Up to 40 feared dead in fire during concert at Oakland, CA warehouse 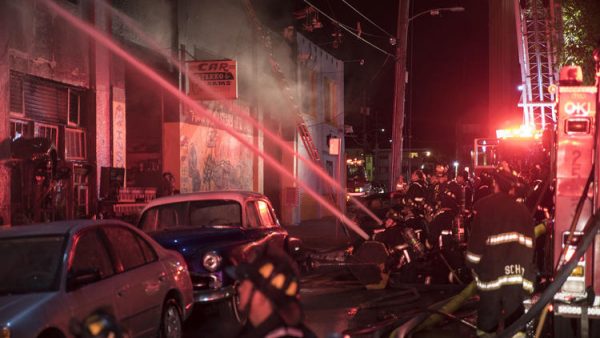 Authorities said they were preparing to deal with dozens of fatalities after a fire raced through a converted warehouse crowded with people attending a Friday night concert, officials said.

Nine bodies have been recovered, but Alameda County sheriff’s Sgt. Ray Kelly said officials were prepared for up to 40 fatalities. He said many of those inside the warehouse were young, some from foreign countries.

Firefighters were beginning to move through the burned-out remains of the building looking for victims. The building’s roof caved in, and debris will make the search effort difficult, Kelly said. Firefighters plan to use drones with thermal-imaging equipment to search the building.

There is no known cause of the fire. While arson is not suspected, Kelly said investigators are on scene and nothing has been ruled out. Officials said the warehouse isn’t currently considered a crime scene.

Officials believe there likely are more fatalities because there are friends and family who still have not heard from some people who attended the concert. Kelly said there were relatively few injuries among those who escaped.

“This is just a tragedy, and there are no easy answers,” Kelly said. “This is not an easy task.”

Witnesses described a horrific fight for survival as people tried to flee the flames.

Al Garcia, who owns a store next to the warehouse, said he talked to two people who said they were 17 and 18 years old who got out of the building.

“They said that black, billowing smoke was coming down the stairs,” said Garcia, 62. “They couldn’t see anything in front of them, anything behind them. The only reason they got out was they heard voices outside. The voices directed them to where they were going.”

The teens said they paid $10 to get into the warehouse party, which they found online, Garcia said.

Oakland City Councilman Noel Gallo, who represents the district where the fire broke out, said neighbors have regularly complained about the building — particularly the fact that it had piles of trash and debris outside.

“We would complain to the manager that they had all that nonsense outside of his building, blocking sidewalks, blocking streets. And …  he always had an attitude,” he said.

Gallo said he did not know whether people were living inside the warehouse. Asked whether the building had residential permits, he said: “Absolutely not.”

“The reality is, there are many facilities being occupied without permits,” he said. “They’re occurring on Oakland’s streets, especially in neighborhoods like mine.”

The property is one of several owned by Chor N. Ng, according to her daughter, Eva Ng, 36. She said the warehouse was leased as studio space for an art collective and not used as a dwelling.

“Nobody lived there,” she told The Times, adding, “It was an art collective.”

She said she had asked her leaseholders about the issue and had been reassured that nobody lived in the building. “They confirmed multiple times. They said sometimes some people worked through the night, but that is all,” she said.

The second-floor had two exits, both wooden stairs, she said, adding that she believes the building also had smoke detectors. She was not familiar with comments by fire officials that the makeshift stairs consisted of packing crates.

Ng added that her mother felt terrible about the tragedy.

The building was the site of a concert Friday night called the Golden Donna 100% Silk 2016 West Coast Tour, according to a concert Facebook page.

Organizers of the concert posted a statement describing the fire as an “unbelievable tragedy, a nightmare scenario. … We are a very tight community of artists and we are all praying, sending love and condolences to everyone involved and their families.”

Witnesses said the warehouse, known locally as the Oakland Ghost Ship, was a collective where artists lived and worked.

Through the early-morning hours, people used the Facebook page to seek information about friends and loved ones who attended the concert. Some frantically listed the names of missing people and posted their photos, hoping to learn their fates.

“Making a new post with the names we currently have missing at the Sheriff’s office. PLEASE comment if you know 100% if any of these people are safe,” one person wrote.

“The police have asked for missing people’s photos and identifying features. Piercings, tattoos, clothing they were wearing, weight, birthday, hair color etc. they asked to post on this Facebook event. Please post info here,” wrote another.

At 10 a.m. Saturday, firefighters were dismantling one of the doors to the blackened building, which was covered with graffiti and had the word “GhostShip” painted outside. Sidewalks in front of the building were strewn with couches, window frames and other debris, and a charred smell permeated the air.

Rolando Jacobo, 41, the owner of nearby memorial headstone store Oakland Monuments, opened at 10 a.m. but had spent most of his morning standing outside his store, watching firefighters pull debris from the burned-out warehouse.

“I saw the fire when I was passing on the freeway last night, and I didn’t know if it was my building on fire,” he said.

Lee Leon, 50, a custodian at the Native American Health Center, got a call at 2 a.m. from a friend who also was driving on the freeway and saw the fire. Leon arrived at the Health Center, about a block away from the fire, shortly after 2. He took photos and called his boss to let him know that the Health Center was fine.

Both Leon and Jacobo said neighbors knew that the warehouse was used as an art studio and that people lived there. The warehouse often held private events “such as art shows,” but Leon, who has worked at the center for 17 years, said the residents were “low key.”

Oakland Fire Chief Teresa Deloach Reed told the East Bay Times that it appears there were no smoke detectors or fire sprinklers in the building. She said the fire may have started near a makeshift stairwell, which might have made it more difficult for people to escape.

“There was a stairwell, a makeshift stairway, that would have been hard to get by if the fire started nearby,” she told the paper.

The chief also said firefighters had to make their way into areas “filled end to end” with furniture, art and other belongings. “It was like a maze almost,” she told the East Bay Times.

Deloach Reed told reporters that there appeared to be “only one way” up to the building’s second floor, where the majority of the bodies were found.

That stairway “was kind of like … they put it together with pallets,” she said.

“This is a true loss for the city, for the firefighters who responded and the people who lost family and friends. It’s just tragic, a real tragedy,” Deloach Reed said.

Artist Bob Mule told KTVU-TV that he tried to help a friend with an injured ankle get out of the burning building but was unable to rescue him. Hours later, he was still searching for his friend.

“It was too hot, too much smoke. I had to get out of there,” he said. “I literally felt my skin peeling and my lungs being suffocated by smoke. I couldn’t get the fire extinguisher to work.”