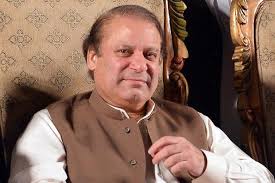 Donald Trump announced late Wednesday that he had “a productive conversation” with the prime minister of Pakistan but the president-elect’s vague short readout of the call lacked any of the juicy details that Muhammad Nawaz Sharif’s office released earlier in the day.

Sharif’s office said that he called Trump to congratulate him on the victory, but according to a statement released after the call it was really Trump who had the kind words.

“You are a terrific guy. You are doing amazing work which is visible in every way. I am looking forward to see you soon. As I am talking to you Prime Minister, I feel I am talking to a person I have known for long. Your country is amazing with tremendous opportunities. Pakistanis are one of the most intelligent people. I am ready and willing to play any role that you want me to play to address and find solutions to the outstanding problems. It will be an honor and I will personally do it. Feel free to call me any time even before 20th January that is before I assume my office.”

According to the Pakistani government, Trump also said “he would love to come to a fantastic country, fantastic place of fantastic people.”

The alleged comments could prove to be problematic for the U.S. relationship with India, which has fought three major wars and multiple border skirmishes since the countries split in two in 1947. They had been part of the larger British colony of India and divided in two in 1947, with the predominantly Hindu parts becoming India and the Muslim sections going to Pakistan.

Pakistan has long viewed India as its major rival in the world, while India considers Pakistan a sponsor of terrorist acts against it, including the November 2008 attacks in Mumbai that killed 164 people.

President Obama has not visited Pakistan but has made two trips to India. But former presidents George W. Bush and Bill Clinton both visited the country when they were president.

Trump’s transition team did not immediately respond to a request for confirmation over the Pakistani readout. However, Trump’s version of the call “noted that he is looking forward to a lasting and strong personal relationship with Prime Minister Sharif.”