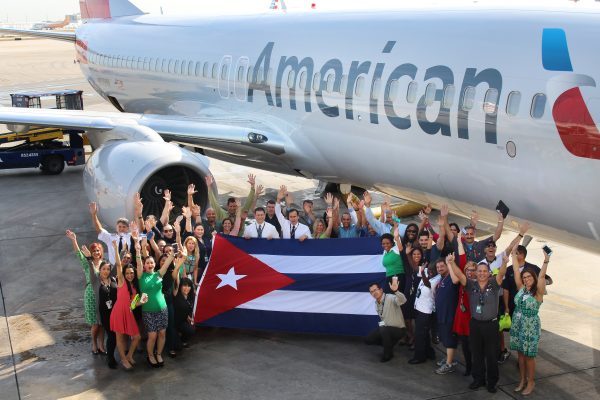 U.S. airlines will launch regularly scheduled commercial flights to Havana on Monday, just in time for the start of funeral services for the island’s former leader Fidel Castro.

Castro, who controlled the communist island for more than five decades in part by railing against America’s capitalist ideals, died Friday. In his final years, the aging, retired Castro was forced to watch as his brother, Raúl, re-established diplomatic relations with the U.S. and welcomed President Obama to the island.

Starting Monday, that new relationship will take another step as American Airlines runs a short, one-hour flight from Miami to Havana, the first regularly scheduled commercial route to the Cuban capital.

That plane will soon be followed by flights operated by United, JetBlue, Delta, Spirit, Frontier, Alaska and Southwest, which will start offering Havana flights from different U.S. airports in the coming weeks.

The new flights are one of the most tangible changes following the decision by Obama and Raúl Castro in December 2014 to normalize relations after more than 50 years of antagonistic isolation. Before, flights between the two countries were operated by charter companies that faced rigid limitations from both governments, making travel expensive and cumbersome.

American landed
The first regularly scheduled commercial flight in more than 50 years from the United States to Havana has landed.

American Airlines held a small celebration before the flight departed from Miami and gave passengers straw hats that said “Cuba” on the back.