ISRAEL: Police detain 23 on suspicion of arson in connection with wildfires 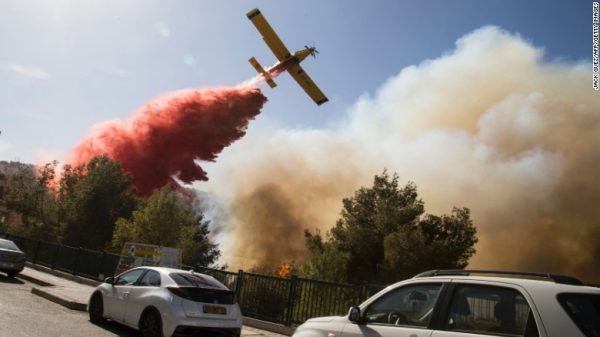 A plane aids firefighters in Haifa.
Share:
Police have detained 23 people on suspicion of arson in connection with wildfires that swept across central and northern Israel this week, said police spokeswoman Luba Samri.

Firefighters have dealt with more than 250 large fires since last weekend, according to Yoram Levi, spokesman for Israel’s Fire and Rescue Services.
Ran Sheluf, head of the investigation unit of the Israel fire and rescue services, said the total number of fires reported to authorities was over 1,500 fires.
“This is twice the usual number,” he said. “The cause of the fires is either negligence or being started deliberately.”

On Saturday, Prime Minister Benjamin Netanyahu called Palestinian President Mahmoud Abbas to thank him for sending fire trucks and personnel to fight the blazes, according to the Prime Minister’s Office.
Palestinian fire crews assisted Israeli crews in northern Israel and near Jerusalem.
Netanyahu heralded the fact that Jews and Arabs alike opened their homes to victims of the fire.
The Palestinian Civil Defense provided eight fire trucks Thursday in response to an Israeli request for help, according to Nael Al-Azzeh of the Palestinian Civil Defense, based in West Bank city of Ramallah.
Israeli police spokesman Mickey Rosenfeld tweeted images of the Palestinian firefighters working alongside their Israeli counterparts in Haifa.

Tens of thousands of residents of the Israeli port city of Haifa, who had been evacuated as wildfires closed in, were allowed to return home Friday. Authorities had ordered the evacuation of 60,000 people there as fires menaced 11 neighborhoods.
Mayor Yona Yahav said Thursday that 700 homes in the city had been damaged or destroyed. He described the scale of the fire as “unprecedented in Haifa.”
The blazes scorching northern Israel began in the northern community of Zichron Ya’akov, about 35 kilometers (22 miles) north of Haifa. The fire there, which has now been extinguished, was definitely arson, according to Uri Chobotaro, of the Coast region fire and rescue services.

The fires have prompted wide discussion among Palestinians on social media. Some posts linked the fires to current proposed Israeli legislation that could ban loudspeakers broadcasting the Muslim call to prayer, suggesting the fires were a punishment from God and sparking the controversial #israelisburning hashtag on Twitter.

This celebratory response triggered an angry backlash from others, including some among Israel’s Arab population, who pointed out that many who see themselves as Palestinians live in those places being ravaged by fire, or have families who originally came from these areas.

Ayman Odeh, an Arab Israeli Knesset lawmaker who lives in Haifa, appeared on TV on Friday morning, criticizing those Israeli politicians and media who were blaming the fires on Palestinians.

“During this stormy day, I have been moving between different media, in an attempt to say this clearly: This is our home and it is our duty to preserve it. Now is the time for joint cooperation, to help evacuate the elderly and all those who need help,” he wrote on Facebook.
CNN