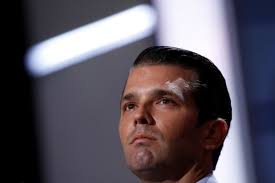 The conference, held at the Ritz-Carlton hotel in Paris, centered on urging the US and Russia to “reach accord on the issue of the Syrian crisis,” according to Randa Kassis, a leader of a Syrian opposition group and wife of the think tank’s founder. The countries’ cooperation is more likely under President-elect Donald Trump, Kassis wrote on Facebook earlier this month.

Kassis apparently told the state-sponsored Russian news agency Sputnik earlier this month that “Trump’s team had realized that it was impossible to reach an agreement between Moscow and Washington” if the US continued to consider Russia an enemy.

Trump Jr.’s presence at the meeting was not reported by Sputnik, but Kassis wrote in the Facebook post that she “succeeded to pass Trump, through the talks with his son, the idea of how we can cooperate together to reach the agreement between Russia and the United States on Syria.”

Trump Jr.’s attendance at a roundtable meeting with pro-Russian, Syrian-opposition elements was confirmed by Kellyanne Conway, one of Trump’s senior advisers.

“Don was addressing a roundtable in Paris, and [Kassis] was present for that talk and at a group dinner for 30 people,” Conway told The Journal. “This event featured a number of opinion leaders from all over the world who were interested in the US elections.”

Donald Trump has often argued that the US should work more closely with Russia and its ally, Assad, to defeat ISIS in Syria.

“I don’t like Assad at all, but Assad is killing ISIS,” Trump said in October during the second presidential debate.

And in an interview with The Journal earlier this month, he indicated that he could pull back US support to Syrian rebels fighting the Assad regime, saying “we have no idea” who the rebels really are.

Assad, for his part, said in an interview last week that he considers Trump to be “a natural ally” in the fight against terrorism.

Assad and his Russian and Iranian allies do not distinguish between non-Islamist rebel groups and jihadist organizations such as ISIS and former Al Qaeda affiliate Jabhat al Nusra, however.

Dozens of Syrian civilians have been killed in the past week by Russian airstrikes on rebel-held eastern Aleppo in a renewed offensive after a three-week halt to the air campaign.

They are the kind of attacks that led US Secretary of State John Kerry to suspend negotiations with Russia over Syria’s future last month, weeks after Russia launched a scorched-earth offensive on Aleppo that targeted hospitals, schools, and rescue workers. Both France and the US have called for a war-crimes investigation into Russian President Vladimir Putin’s and Assad’s actions in Syria.

Russia has picked out members of the opposition who it would be willing to work with, but these include only rebel figures willing to accept a role for Assad in a political transition — a condition deemed unacceptable by many, if not most, of Syria’s opposition fighters.