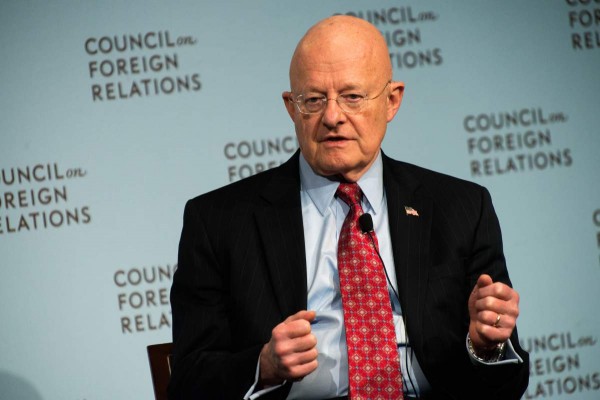 “I know a lot of people have been feeling uncertain about what will happen with this Presidential transition,” Clapper said. “There has been a lot of catastrophizing, if I can use that term, in the 24-hour news cycle and social media. So, I’m here with a message: It will be okay.”

The exit of Clapper, who submitted his resignation Wednesday evening, is not a surprise.

In interviews with NBC News over the last year, Clapper said he was counting down the days to stepping down at the end of Obama’s final term in office. He started as a young intelligence officer reporting to his father during the Vietnam War and said that after than 50 years of service it was time to go.

Clapper’s resignation, which is effective Jan. 17, comes as the Trump team has been struggling to put together a cabinet and mulling what’s likely to be a change in national security direction once Obama departs.

But soon it was back to politics. And Clapper found himself fielding a question from Rep. Joaquin Castro, a Texas Democrat, about FBI director James Comey’s sudden announcement — in the final days of the presidential campaign — that he was reopening an investigation into Hillary Clinton’s emails.

Calling Comey’s move an “unprecedented intrusion by a director within our own intelligence community in our democratic process,” Castro asked Clapper if “you believe that Director Comey breached any protocol.”

“I have no reason to question Director Comey,” Clapper replied. “I think extremely highly of him so whatever actions he took he did so what he felt was best and I have no basis for questioning him.”

Clapper’s job is to oversee Comey’s FBI and 16 other intelligence agencies, including the CIA, NSA (National Security Agency) and the DEA (Drug Enforcement Agency).

Appointed by Obama and confirmed by the Senate in 2010, Clapper’s tenure in office was marked by high profile showdowns over the government’s desire to protect its Americans and citizens’ civil liberties.

During a tense March 2013 exchange with Democratic Oregon Sen. Ron Wyden over whether the NSA gathers “any type of data at all on millions of Americans,” Clapper responded “no” and “not wittingly.”

Then in June of that year, The Guardian published documents leaked by whistle blower Edward Snowden, including a top secret court order showing that the NSA had collected phone records from over 120 million subscribers.

Snowden later told Wired magazine that it was Clapper’s testimony that prompted him to leak the documents.

In a 2013 interview with Andrea Mitchell, Clapper said he gave the “least untruthful” response to a complicated question. But Wyden, a Democrat, accused Clapper of “not giving a straight answer.” And Rep. Justin Amash, a Michigan Republican, flat-out accused Clapper of committing perjury.

Clapper later suffered the indignity of having his own personal accounts hacked by a hacker named “Cracka.”

In October, Clapper’s office released a statement claiming Russia was directly involved in a cyber campaign designed to disrupt the presidential election. It said the operation was likely approved by Russian President Vladimir Putin.

Despite having been personally briefed by U.S. officials on Russia’s role in the hacks, Trump during one of the debates said he didn’t know if Moscow was behind the hacking and insisted it “could be somebody sitting on their bed that weighs 400 pounds, OK?”

In a statement, Sen. John McCain (R-Arizona) praised Clapper’s leadership, saying he “provided steady leadership for the Intelligence Community and wise counsel to the President and the Congress.”