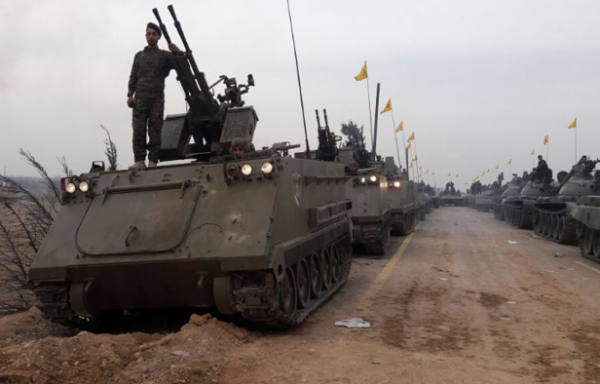 In its first-ever military parade on foreign soil, Lebanon’s Hezbollah flaunted a sizeable fleet of heavy weaponry in the Syrian city of Qusayr Friday, according to news reports and photos circulated by social media accounts close to the organization.

Among the arms and vehicles on display were Soviet-made T-72 tanks and KS-12A anti-aircraft cannons; Russian Kornet anti-tank missiles (mounted, in some cases, on quad bikes); dune buggy-mounted machine guns; and off-road motorbikes. Significantly, the parade also featured American-manufactured M113 armored personnel carriers (APCs), of the type provided by the United States to the Lebanese army (LAF), prompting concerns among security analysts that Hezbollah may potentially have procured them from the LAF, which continues to receive American military aid.

Hezbollah has previously seized M113s from the now-defunct Israeli-backed South Lebanon Army. It’s possible they also captured some from a Syrian jihadist faction, Jabhat al-Nusra, which itself won a number off the LAF during an August 2014 battle in the border town of Arsal.

Qusayr was a symbolic choice of venue for Friday’s parade. It was the first city taken off Free Syrian Army hands by incoming Hezbollah militants, after a bloody battle in the spring of 2013 that marked a turning point for the rebels’ fortunes in the broader province surrounding Homs, then known as the ‘capital of the revolution.’ Later that year, a Wall Street Journal reporter who visited the city wrote that, “Today, Hezbollah independently runs Qusayr […] The Lebanese militia has established an operations base in the town’s northern section that is off-limits to most Syrian civilians.”