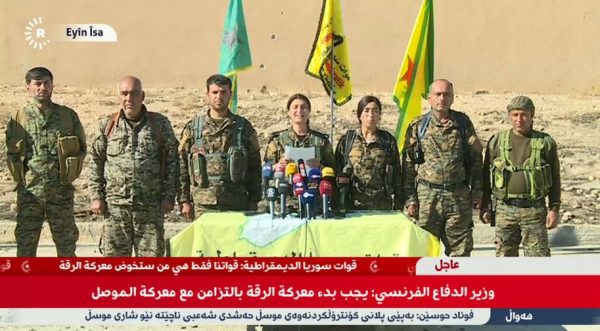 International coalition forces and #YPG in joint efforts to liberate Raqqa from ISIS control.
Share:
U.S.-backed Kurdish-led Syrian forces have announced the start of a campaign to retake the Islamic State’s de facto capital of Raqqa from the extremist group.

The announcement by the Syria Democratic Forces, a coalition of Kurdish, Arab and Christian forces, was made Sunday at a press conference in Ein Issa, north of Raqqa, attended by commanders and spokespeople for the group. An official who read out a statement said the operation to liberate Raqqa, dubbed the “Euphrates Rage” operation, had officially begun.

The statement said that 30,000 fighters will take part in the operation.

The campaign to liberate #Raqqa is code named Ops. Wrath of Euphrates – use the hashtag to follow latest developments: #WrathOfEuphrates pic.twitter.com/sAH7ZYLwCA


The announcement comes as U.S.-backed Iraqi forces had entered the eastern edges of the IS-held city of Mosul and were working to push deeper into the last IS urban bastion in Iraq. But the Kurdish officials said the two campaigns were not coordinated, but simply “good timing.”

The SDF is dominated by the main Syrian Kurdish fighting force known as the People’s Protection Units, or YPG. The United States considers the group as the most effective force against the IS, but Turkey views them as a terror organization and claims it’s linked to Turkey’s outlawed Kurdish group. Turkish officials including President Recep Tayip Erdogan have said they will not accept a role for the Kurds in the liberation of Raqqa.

Turkey’s defense minister last week suggested that instead of the Kurds, Turkish-backed forces can present an “alternative.”

But Kurdish officials have rejected any role for Turkey, or the opposition forces it backs inside Syria, in the Raqqa campaign, and U.S. officials have also acknowledged that the YPG will be a major part of any Raqqa offensive.

“Our hope is that the Turkish state will not interfere in the internal affairs of Syria,” said an unidentified SDF official at Sunday’s press conference. “Raqqa will be free by its own sons.”

There was no immediate comment from Turkey or the U.S. on the Kurdish announcement.

U.S. officials have acknowledged that ousting IS from Raqqa poses tougher political challenges than the offensive on Mosul, and have suggested the initial stage would involve isolating the city before any forces try to move in.


The commander of anti-IS coalition forces, Lt. Gen. Stephen Townsend, said last week that American intelligence has detected signs that Islamic State attacks against Western target are being plotted from Raqqa, adding urgency to coalition plans to encircle and eventually assault the city.

“We know this plot-and-planning is emanating from Raqqa. We think we’ve got to get to Raqqa pretty soon.”

But coalition leaders have been struggling with the timing for the Raqqa campaign, not only because of the demands of the large Iraqi-led Mosul operation but also because the political and military landscape in Syria is more complicated. Townsend said more Syrian opposition fighters need to be recruited, trained and equipped for the Raqqa battle, but he and other officials have said in recent days that the Mosul and Raqqa operations will overlap.

Unlike in Iraq, where the coalition has a coherent government to work with, the U.S. and its coalition partners in Syria are relying on a hodge-podge of local Arab and Kurdish opposition groups, some of whom are fierce rivals. The tensions are exacerbated by the presence of Russian and Syrian forces on one side and Turkish forces on another.

Townsend said, however, that the YPG will necessarily be part of the offensive.

“The facts are these: The only force that is capable on any near-term timeline is the Syrian Democratic Forces, of which the YPG are a significant portion,” Townsend said. “So, we’re negotiating, we’re planning, we’re having talks with Turkey and we’re gonna take this in steps.”