An organization hoping to facilitate the secession of California from the Union is holding a meet and greet on the Capitol steps in Sacramento next Wednesday, November 9, 2016, or, the day after the presidential election.

The Yes California Independence Campaign, which is based in San Diego, is aiming to qualify a citizen’s initiative in 2018 to get a referendum for secession on the ballot in 2019. They’ll be in Sacramento to garner support for their initiative.

“In our view,” a statement on its website reads, “the United States of America represents so many things that conflict with Californian values, and our continued statehood means California will continue subsidizing the other states to our own detriment, and to the detriment of our children.”

And it appears the organization has been considering its strategy for quite a while now. On its site, you’ll find a link to a 33-page “Blue Book” wherein the organization answers any hypothetical questions about the state becoming its own country. The details for the secession — dubbed the #CalExit — include such topics such as “Will we join the United Nations?” and “Will we have our own Olympic team?”.

While the notion of an independent California does seem well-intended — points about immigration, environmental concerns, and education are thoughtful — the practicality of such a proposal is tenuous at best.

Will this secession campaign be viable? In a word: No. As we know from the Civil War, just because a state wants to secede doesn’t mean the Union will let it. As Washington Post writer Philip Bump wrote earlier this year, Congress simply would not, for many reasons, allow it.

“There’s no mechanism for Congress to simply say, ‘Sure, off you go.’ Once you’re in, you’re in,” he wrote. “The United States was born an expansionist enterprise, and the idea of contraction, it seems, never really came up.”

Nevertheless, the Facebook group for the organization is surprisingly strong. With over 11,000 members who have liked the page, the movement might at least gain some steam…even if it is just a lot of useless hot air. 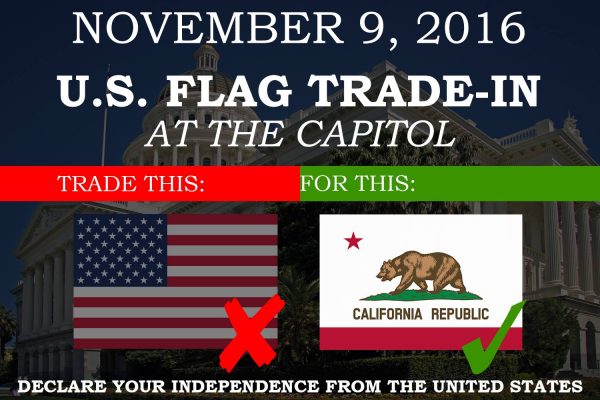 In the meantime, you can learn more about their platform here at their website.