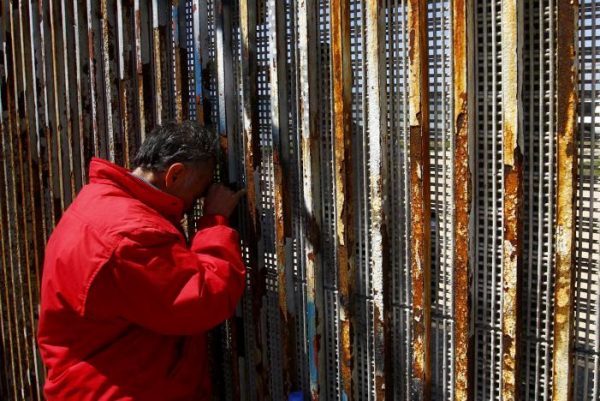 A man talks to relatives at a wall separating Mexico and the United States, as photographed from Playas Tijuana, in Tijuana, Mexico, April 10, 2016. REUTERS/Jorge Duenes/File Photo
Share:

In the small southern market town of Molcaxac, 650 miles (1050 km) from the U.S. border, Alicia Villa is praying to God that Republican candidate Donald Trump does not become the next president of the United States.

Over the past two decades, as Mexico’s rural economy stalled, Molcaxac and hundreds of towns like it became dependent on dollars sent by relatives who made the perilous journey north, a lifeline she fears will be cut by a Trump White House.

Villa, 65, said funds sent by a daughter working illegally as a house cleaner in Sacramento, California have supported her family for 12 years because the work she does as receptionist in Molcaxac does not pay enough to make ends meet.

“I am Catholic and I have asked God and the Virgin of Asuncion that he lose,” Villa said of Trump, placing her head in her hands and intoning a prayer in the square of the deeply religious hill town dominated by a striking blue church.

Inside, the church was adorned with notes thanking migrant relatives for money sent to help build homes, start businesses and pay for marriages in the town surrounded by rivers, mountains and meadows in the state of Puebla.

“Trump says he will kick out everyone who doesn’t have papers and we really need them to be there,” said Villa, adding that she had not seen some family members living in the United States in 20 years.

Trump, a real-estate tycoon who has narrowed the gap with Democratic rival Hillary Clinton ahead of next Tuesday’s vote, has vowed to make it harder for illegal immigrants to live and work in the United States, to increase deportations and to limit remittances unless Mexico pays billions for a wall along the nearly 2,000-mile (3,200-km) U.S.-Mexico border.

Such policies would take a heavy toll in Molcaxac, where local authorities say more than 70 percent of the population lives on remittances sent home by immigrants to the United States, many of them undocumented.

“Our town has improved a lot since our people started to leave for the United States,” said stonemason Esteban Marquez, whose workshop was partly funded by remittances from one of his children.

‘NOTHING FOR THEM’ HERE

Mexico has more than 5 million citizens living without regular papers in the United States, or about half of the entire undocumented population.

Those men and women send back a large chunk of Mexico’s foreign exchange earnings, contributing more than $20 billion in remittances wired this year through September.

According to Mexico’s Central Bank, Puebla received $1 billion in remittances in the same period, making it the fifth biggest recipient among Mexican states.

So many people from Puebla live in the New York area that New Jersey Governor Chris Christie, a Trump supporter, visited the state in 2014. Couriers have grown rich transporting salsas and fresh cheese to homesick natives up north.

The money has transformed places like Molcaxac, a picturesque town dotted with well-built homes attesting to the flow of dollars.

It is not just the potential loss of income Trump could spark that worries Molcaxac locals.

The lack of employment in rural Mexico is one of the main reasons drug gangs find it easy to recruit among young people and those deported from the United States, they say.

“Here in Mexico, the truth is there is nothing for them,” said stonemason Marquez. “The people who stay need to survive, and since there is no work, they get pulled into crime.”

‘VOTE FOR THE LADY’

Opinion polls in the run-up to the election suggest that Villa’s prayers stand a good chance of being answered, with most putting Clinton consistently ahead of her Republican rival.

But the polls also show her losing ground in the final stretch. Real Clear Politics, which averages the results of most major polls, shows Clinton’s advantage had declined from 4.6 percentage points to 1.7 points over the past week.

Even those of more modest means in Molcaxac are on edge with America’s election.

“Only God knows if they are going to be able to stay there,” said Serafina Martinez, who at 70 still works in the fields.

She worries it would be hard to survive without the little her son in California sends when he can.

“I would like him to keep helping us with pennies,” said Martinez, her curved back laden with firewood and groceries.

But there is no doubt in the minds of Molcaxac’s townspeople that they would rather see Clinton in the White House.

Clinton has proposed comprehensive immigration reform with a path to citizenship, and says she will end detention of immigrant families.

“I think she will win, and that gives us hope that our relatives will be able to regularize (their papers),” said Teresa Amador, selling flowers in the main market. “I have a son who was born there, and he is going to vote for the lady.”