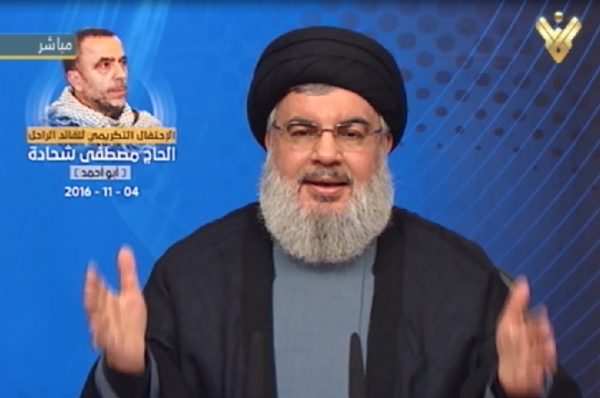 Hezbollah chief Hassan Nasrallah deliver a speech on Friday in Beirut to mainly address the recent political development in Lebanon during a ceremony held in honor of slain Hezbollah commander Mustafa Shehadeh (Abu Ahmed) who was killed recently in Syria while fighting in support of the Syrian regime.

“From the very first moment, we were honest in our stance and in our support for Michel Aoun and in the fact that we wanted the election of a president. We wanted this man to become president and we did not change our stance for a single moment.” he added.

“After the election of a president, now there is a chance to say that we in Hezbollah faced a lot of injustice and false accusations throughout the two and a half years, and I hope those who launched false accusations will reevaluate their stances.”

In a possible reference to Lebanese Forces leader Nasrallah denied that his party was embarrassed ( after former Lebanese PM endorsed Aoun) and forced to participate in the October 31 election session.

“Even after the election, someone kept insisting on taking credit but we did not jump into this debate. There is a party that is insisting on saying that they embarrassed us into taking part in the Oct. 31 vote, but why didn’t they do this two and a half years ago?

” There are no deals or agreements between us and President Aoun but rather confidence and we trust him and his independence , transparency and patriotism, “he stressed.

“One of the parties said that Hezbollah’s commitment to Aoun was only moral and not political, but we support Aoun, what he represents and his characteristics,” Nasrallah emphasized.

“Speaker Nabih Berri shall be credited for the way he administered the session with his wisdom and conscience despite his political position. His eminence hailed Berri as a “statesman who safeguards Lebanon” and the “major guarantee in difficult times.”

Commenting on government formation by PM designate Saad Hariri, Nasrallah said
“We won’t join the next government if Speaker Berri and the AMAL Movement do not take part in it and Speaker Berri is authorized to negotiate over portfolios and shares on behalf of AMAL and Hezbollah.”

“This country needs a national unity government and the cooperation of all forces and the PM-designate said he will exert efforts in this direction”, Nasrallah added and offered to help facilitate its formation.

Many observers agree with Geagea that Hezbollah had no choice after Hariri endorsed Aoun and would have been very embarrassing if Hezbollah MPs didn’t attend the voting session. The same observers are of the opinion that Nasrallah was able to facilitate Aoun’s election right after Geagea endorsed him, if he really wanted a president for Lebanon, because he had enough votes to get him elected

Observers also are of the opinion that for the first time Nasrallah is on the defensive . The observers feel that Nasrallah felt isolated after after the election of the president and the appointment of Hariri as PM designate with or without his party’s participation. Hezbollah was the only major party that voted against Hariri’s designation as PM by president Aoun