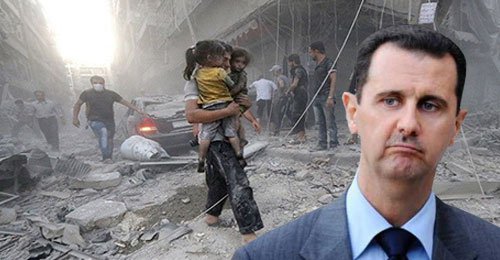 By ANNE BARNARD
The guns were silent atop Mount Qasioun and the lights on its slopes twinkled over Damascus as President Bashar al-Assad of Syria welcomed a group of Western visitors into his French-Ottoman palace on Monday night, presenting himself as a man firmly in control of his country.

He radiated confidence and friendliness as he ushered a group of British and American journalists and policy analysts into an elegant wood-paneled sitting room where he claimed that the social fabric of Syria was stitched together “much better than before” it had been before a chaotic civil war began more than five years ago. It was as though half his citizens had not been driven from their homes and nearly half a million had not been killed in the bloody fighting for which he rejected any personal responsibility, blaming instead the United States and Islamist militants.

“I’m just a headline — the bad president, the bad guy, who is killing the good guys,” Mr. Assad said. “You know this narrative. The real reason is toppling the government. This government doesn’t fit the criteria of the United States.”

It was a surreal meeting for me after years of writing about a devastating and intractable war that has reduced several of Syria’s once-grand city centers to rubble and prompted accusations of war crimes. While hundreds of thousands of Syrians are besieged and hungry, here was Mr. Assad, secure in his palace because he has outsourced much of the war to Russian, Iranian and Hezbollah forces whose influence has grown to a degree that makes some of his own supporters uncomfortable.

He was on a mission to convince the West that their governments had made a mistake in backing his opponents, and that he was secure in his position as the custodian of Syrian sovereignty.

Waxing philosophical, he spoke of every Syrian’s right to be “a full citizen, in every meaning of this word,” and likened intolerant versions of religion to a computer operating system that needed to be updated. He promised that a new era of openness, transparency and dialogue was underway in Syria, and said that he was thinking ahead about how to modernize Syrians’ mentality after a war that he believed his forces were assured of winning.

Mr. Assad ruled out political changes until then, and declared that he planned to remain president at least until his third seven-year term ends in 2021.

Even as Mr. Assad and his inner circle tried out this new line of openness about the situation in Syria, they were hardening their stance against compromising with domestic or international opponents. They contended that the United States was actively backing the Islamic State and other extremist militants, and called allegations of war crimesagainst Syrian officials politically motivated, fabricated or both.

Despite “thousands of Syrians killed by the terrorists,” Mr. Assad asserted, “no one is talking about war crimes” by his opponents.

In fact, the day before, the United Nations special envoy to Syria, Staffan de Mistura, followed by Amnesty International and other international rights groups, condemned the rebel groups’ indiscriminate shelling of government-held sections of Aleppo, attacks that have killed scores of civilians in recent days.

But it is Syrian government warplanes that have indiscriminately pounded insurgent-held residential areas daily for years; government forces that have imposed starvation sieges; and state detention facilities where thousands of people — including peaceful protesters, bloggers and other civilians arrested seemingly at random — languish without trial, often under torture.

We asked Mr. Assad about these things, of course.

“Let’s suppose that these allegations are correct and this president has killed his own people and the free world and the West are helping the Syrian people,” Mr. Assad said in English. “After five years and a half, who supported me? How can I be a president and my people don’t support me?”

He gave a small giggle and added, “This is not realistic story.”

Indeed, Mr. Assad has managed to hold on not only because of decisive intervention by foreign fighters, but also thanks to deeper support in some quarters than many thought he had.

Mr. Assad said on Monday that while much of his support came from people who may dislike his policies or the Baath Party he heads, they fear that the alternative would be extremist rule or state collapse.

“They learned the value of the state,” he said, acknowledging that this support could diminish if the war ends. “That’s what brought them towards us, not because they changed their mind politically.”

Mr. Assad’s remarks came after a two-day conference organized by the British Syrian Society, headed by his father-in-law, Fawaz Akhras, that was billed as part of a new openness and an effort to compete in what has been termed a news media war.

I was among several dozen international journalists and analysts who attended the conference as a way to get into the country after more than two years of being unable to obtain a visa. There was no sign that the policy requiring journalists to travel with minders and to go through elaborate hoops to visit specific areas had changed.

But Damascus, the capital, appears less tense than on my last visit, in 2014. New bars are packed in the historic old city. After advances by pro-government forces and what the government calls reconciliation deals with besieged rebel-held suburbs, artillery fire no longer pounds those districts daily, and rebel mortar fire hits the city less frequently.

The message from government officials and Assad supporters echoed the president’s: They believe they are winning and they are ready to engage with the West, but on their own terms.

“It is up to the West to rethink about their policies,” the Syrian foreign minister, Walid Muallem, told a group of us on Monday, adding that the government would welcome, though it did not expect, cooperation from the United States.

Mr. Muallem said the government would fight to defeat any militants refusing to return to government rule — be they Kurdish groups in the northeast, or the Qaeda-linked groups and American-backed rebels fighting in Aleppo. He dismissed the possibility of any deal that would retain local opposition control in eastern Aleppo, saying that would “reward those murderers.”

Mr. Assad, for his part, said during our meeting that “until this moment, we still have a dialogue through different channels,” even to the United States. “But that doesn’t mean to give up our sovereignty and transfer Syria into a puppet country,” he added.

The confident statements come amid a much more complicated picture.

Despite Russian air support and thousands of militia fighters from Iraq and Hezbollah, the government’s push to retake the rebel-held half of Aleppo is facing stiff resistance and counterattacks.

The Syrian pound is worth one-tenth of its prewar value against the dollar. Millions of Syrian children are unable to attend school. The Islamic State still holds large swaths of Syria.

Mr. Assad, in a dark suit and trademark Windsor-knotted tie, met us at the top of the palace’s sweeping staircase, saying he found it “more cozy” than the official one. There were no security checks.

Hanging in the grand entryway was a painting of a distorted, grimacing figure, a signature work by the Syrian artist Sabhan Adam, who draws inspiration for his “human monsters,” his website says, from “the pain, fear and phobia which our society constantly suffers from.”

Mr. Assad joked about his love of technology — “I follow the gadgets on a daily basis” — and noted with pride that 4G mobile phone technology had been introduced in Syria during the war. But he brushed off reports that he loved video games. “The last video game I played was Atari,” he said. “Space Invaders.”

Pressed on how Syria might be restructured or reformed, he said the first change needed was in its mental “operating system,” which he said was based on religion.

Ideologies based on “bad interpretation” of Islam had fueled the war, he said, rejecting analysts’ contentions that his government had accelerated the process by building mosques and funneling jihadist fighters to Iraq during the United States occupation.

He denied the existence of political prisoners and grew steely when asked about people detained for protesting or writing against the government.

“If you support the terrorists, it’s not political prisoner,” he added. “You are supporting the killers.”

He said that he had released tens of thousands of prisoners through amnesties to pave the way for “any solution in our society,” but that he had the authority to release only those who had been tried and sentenced.

Asked about specific detainees whose families have heard nothing of them for years, he demanded proof, saying: “Do you have documents? Did they see them in prison?”

Mr. Assad said he was fighting to preserve state institutions and criticized Western intervention. “Good government or bad, it’s not your mission” to change it, he said.