THE spectre of war in Europe has become all too real as Britain sends planes, tanks and troops east to counter the threat from Russia.

Nato believes that Russia’s President Vladimir Putin has amassed 330,000 troops along the border to the EU and its allies.

While some politicians think the Russian leader is only sabre rattling, others believe we need to take the build-up very seriously.

YOU have to see Russia as a threat because their military doctrine is clear – they see Nato as their main opponent – and they are exercising in ways which are quite aggressive.

In 2009 they carried out a military exercise which included a simulated nuclear strike on the Polish capital Warsaw.

That is threatening and you can’t bury your head in the sand and say nothing has changed. From Putin’s point of view the ideal situation is that you intimidate Nato countries so much you can ask for anything and get it without having to use force.

A lot of the talk about 330,000 troops amassed along Europe’s borders is intended to make our politicians say we must give Putin what he wants at any cost.

For example, Putin might ask for Nato to move its forces 100 miles back from Russia’s border. If you show that you are not prepared to go down that road, then you are less likely to end up with a serious miscalculation by Russia. 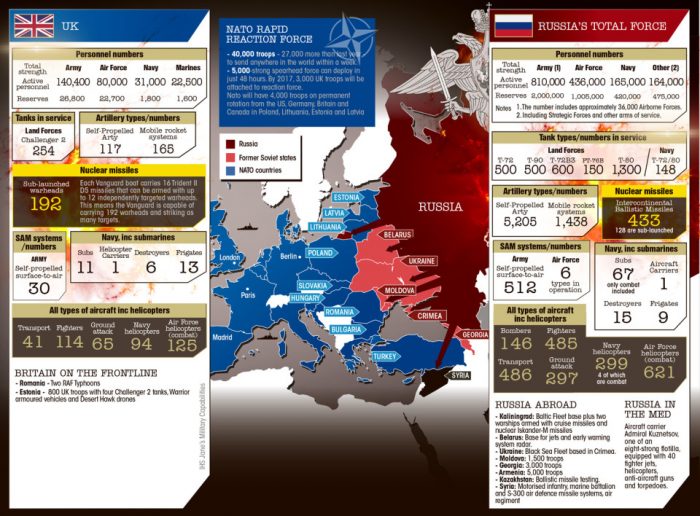 Nato wouldn’t be a pushover in a war and Putin would be wrong to think we would be.

Britain and the French have capable military forces, while Germany, Poland and Turkey also have considerable forces.

None of these countries would be so militarily overwhelmed by Russia that the US wouldn’t be able to get there quickly enough.

He has shown that he is a risk taker, but I think he is a calculated risk taker.

He didn’t move in to Ukraine when it was united, he waited until a new government was being formed and he was able to add to that uncertainty.

He is not crazy. The people who win in poker games aren’t the ones who risk everything on everything.

They are the ones who look at the odds, look at how they can make their opponents think they have a stronger hand than they do . . . and then strike.

Putin is much more in that mode than “roll the dice and see what turns up”.

All the talk of Russia’s readiness for war is to make nervous Western politicians say: “Gosh, we should make plenty of concessions to the Russians because they are obviously very angry.”
Russians brandishing weapons do have a frightening effect on some Europeans.

But we should be resolute rather than be frightened. There is a threat there as there was during the Cold War.

The way we responded to that threat was not by making concessions, but by standing firm and letting the Russians know that if they try anything they will get a very bloody nose.