Americans are fed up with the Clinton-Tump negative election campaigns 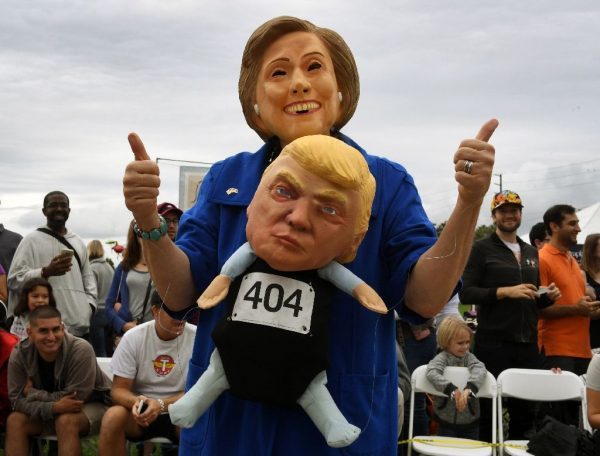 The US presidential election is only a few days away, but for most Americans worn out by the vicious campaign, the vote can’t come soon enough.

According to a recent Harris Poll on behalf of the American Psychological Association (APA), more than half of Americans are stressed out by one of the most adversarial contests in recent history.

For months, Donald Trump, the Republican candidate vying for the White House, has hammered away at President Barack Obama’s policies on health care, Syria or trade, denouncing them as a “disaster” and warning that his Democratic rival Hillary Clinton would lead the country to “catastrophe.”

He has also warned that hordes of migrants, described as “rapists” and “criminals,” are seeking to slip into the United States through the border with Mexico — where he wants to build a wall — and that jihadists are hiding among Syrian refugees.

Clinton for her part has also gone for the jugular, denouncing her rival as “unstable” and capable of unleashing nuclear war “just because somebody got under his very thin skin.”

She has lashed out at him over allegations of groping women and sexual assaults — charges he has denied.

“It’s a very negative campaign, with candidates accusing each other of lying, saying the election is rigged and it generates a sense of hopelessness, of ‘this is the end my friend,'” Bloom said.

Robert Bright, a psychiatrist in the western state of Arizona, said not since the September 11, 2001 attacks or the financial crisis has he seen this level of anxiety among Americans.

“Just yesterday, I saw a woman who had trouble sleeping at night,” he told AFP.

“Another patient who is very ill joked that the good thing about dying is that he will not have to watch any more political commercials.”

Rather than using campaign slogans such as Obama’s rallying cry of “Yes We Can,” the 2016 frontrunners in the race have played up the Fear Factor which has increased voter angst.

“People fear for their financial safety, for the national security, terrorist attacks, there’s a fear of the ‘other,'” Bright said.

He added that Republicans especially are concerned about the future makeup of the US Supreme Court, where the next president will potentially appoint three or more new justices to lifetime seats.

Added to that, Republicans are also fearful of losing control of both houses of Congress and are fretting over the future of their party, which has been left in tatters.

The campaign has meanwhile often sunk below the belt amid lurid sex scandals and hyperbole.

Trump has repeatedly labeled Clinton “crooked” and appeared with women who have accused his rival’s husband — former president Bill Clinton — of sexual assault.

He has also talked about the size of his penis and, in a lewd 2005 recording that upended the campaign, bragged about grabbing women’s genitals and making unwanted advances.

“Those words, images, created a feel of lack of safety for women in general,” Bright said. “And for those having had sex aggression, it absolutely triggered things, reactivated traumas, gave them nightmares.”

But despite all the gloom and doom of the campaign, the APA noted that whatever the outcome of the November 8 vote, “life will go on.”

“Our political system and the three branches of government mean that we can expect a significant degree of stability immediately after a major transition of government,” it said.