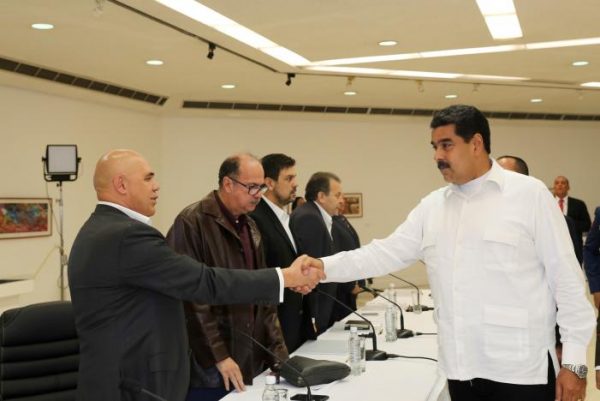 Government and opposition leaders in Venezuela agreed on Monday to continue a Vatican-backed dialogue following initial talks meant to ease an escalating political standoff taking place against the backdrop of a worsening economic crisis.

The two sides, which over the years have repeatedly held talks that generated few concrete results, will meet again on Nov. 11, according to the opposition Democratic Unity coalition.

“We are here to defend the Venezuelan people, to defend the people’s right to escape this crisis through peaceful means,” the coalition said after the meeting, which stretched from late Sunday into dawn on Monday.

The meeting included an envoy from the Vatican, which helped bring the two sides to the table, as well as three former heads of state. A papal envoy said the Pope is closely following the situation and hopes the process will proceed peacefully.

President Nicolas Maduro’s adversaries accuse him of creating a dictatorship by blocking a recall referendum on his rule and of illegally overriding the legislature, which was taken over by the opposition in a landslide election last year.

Maduro, who is struggling to control shortages of consumer goods and soaring prices in an unraveling socialist economy, says he is a victim of opposition conspiracies to overthrow him and of an “economic war” led by businesses with the backing of Washington.

Coalition spokesman Jesus Torrealba said early Monday that dialogue cannot continue without “concrete and immediate action in the coming days with respect to the release of political prisoners.”

Four major opposition parties have joined the talks. The influential Popular Will party, led by jailed former mayor Leopoldo Lopez, did not join, insisting the government had not shown enough respect for human rights.

Congress is currently conducting a largely symbolic trial of Maduro to declare him politically responsible for the country’s crisis and formally declare that he has violated democratic principles.

The opposition is also scheduled to march to the presidential palace this week, following massive demonstrations last week and a national strike on Friday that was only partially observed even by government critics.

Maduro called the congressional proceedings a coup attempt, and insisted that decisions regarding the referendum were made by the country’s elections council without his involvement.