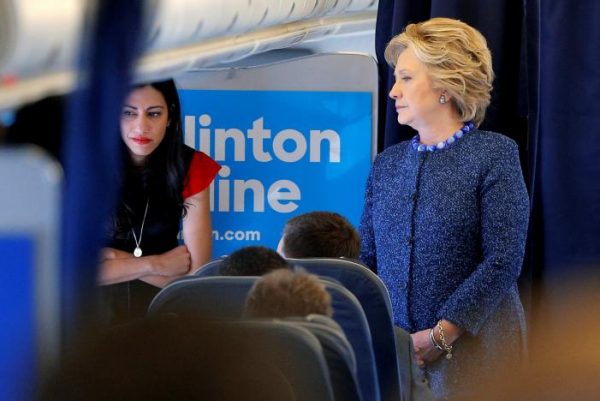 
The FBI said on Friday it was investigating more emails as part of a probe into Hillary Clinton’s use of a private email system, in a new twist to the U.S. presidential campaign just 11 days before Election Day.

Federal Bureau of Investigation Director James Comey said in a letter to Republican U.S. congressional committee chairmen that the agency will determine whether the emails contain classified information.

It was not clear how the announcement would affect Democratic nominee Clinton’s efforts to win the Nov. 8 presidential election. She leads Republican Donald Trump in opinion polls after a bruising campaign.

Comey said he did not know “how long it will take us to complete this additional work” or how significant the new material might be.

A government source said the emails were found on a device other than Clinton’s private email server, which they had been examining earlier as part of a year-long investigation that had appeared to be finished.

Although investigations have failed to find that Clinton violated the law, Trump has repeatedly said Clinton’s email practices are criminal and should disqualify her for office. He seized on Friday’s news.

“I need to open with a very critical breaking news announcement,” Trump said at the start of a rally in Manchester, New Hampshire, before describing Comey’s letter.

He was drowned out by a chant from the crowd: “Lock her up!”

Clinton has repeatedly apologized for using the private email server in her home in New York state instead of a government email account for her work as secretary of state from 2009 to 2013. She has said she did not knowingly send or receive classified information.

U.S. stocks declined in a volatile session on Friday but were able to partially recover from a sharp drop spurred by the FBI announcement. The Dow Jones Industrials Average closed the day, down about 9 points, while the benchmark 10-year Treasury note was unchanged on the day.

The White House campaign has moved into its final days with former first lady Clinton, who has been subject to intense scrutiny for years, seemingly having the upper hand over Trump, a New York businessman who has never held public office.

Election experts say about 20 percent of ballots have already been cast, as more Americans vote by mail or go to the polls early.

“A lot of concern about the emails has already been baked into this electoral cake I think. They know she did it, they know it was inappropriate and, failing some sensational revelation on Nov. 6, it’s hard to see that it’s going to make that big a difference,” said Linda Fowler, a professor of government at Dartmouth College.

Clinton’s campaign chairman, John Podesta, said it was “extraordinary” for the FBI to release the letter so close to the end of a hotly contested election.

“The Director owes it to the American people to immediately provide the full details of what he is now examining. We are confident this will not produce any conclusions different from the one the FBI reached in July,” Podesta said in a statement.

The FBI spent about a year investigating Clinton’s use of an unauthorized private email server over concerns that classified government secrets might have been in some of her emails.

In July, the FBI characterized her handling of such information as “extremely careless” but recommended that no criminal charges be brought.

Abedin has filed for divorce from Weiner. The FBI has been investigating illicit text messages alleged sent from Weiner to a 15-year-old girl in North Carolina.

Republican lawmakers, who are facing a difficult fight to keep their majorities in both the U.S. Senate and House of Representatives, leaped to condemn Clinton.

Paul Ryan, the speaker of the House, repeated his call that the Democratic nominee be barred from briefings involving classified information until the investigation is over.

Clinton did not respond to reporters’ shouted questions about the news when she left her plane for a campaign stop in Cedar Rapids, Iowa.