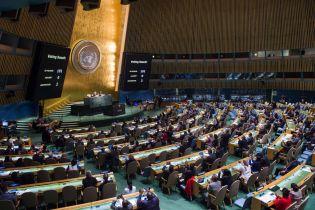 The U.N. General Assembly votes on Wednesday, October 26, 2016 in favor of a resolution condemning the U.S. embargo on Cuba. The large screens provide the vote outcome – 191-0, with two abstentions. (UN Photo/Amanda Voisard)
Share:

Making a bit of history, the United States on Wednesday abstained for the first time in an annual General Assembly condemnation of the half-century-old American trade embargo against Cuba.

The abstention — a break from the “no” vote the United States delegation has always cast — was another important signal by the Obama administration of its intention to fully repair relations with Cuba, including an end to the embargo.

The reconciliation began two years ago when President Obama abandoned the policy of his predecessors to isolate the Castro government in Cuba and moved to restore diplomatic ties with the island nation of 11 million.

The United States and Cuba formally re-established embassies in each other’s capitals in July 2015, ending more than more than five decades of Cold War-era enmity. But the embargo, which can only be rescinded by Congress, remains in force.

A General Assembly resolution condemning the embargo, proposed every year since 1991, had become something of a ritualized event at the United Nations, used by Cuba and many others to castigate the United States. The lone American ally on this issue, Israel, also changed its vote on Wednesday to abstain.

The vote for the resolution, taken early Wednesday afternoon, was 191 in favor, none opposed and the two abstentions.

Word of the new American position had spread among diplomats in the hours before the vote, and when the United States ambassador, Samantha Power, announced the change in the General Assembly hall, she beamed as other delegates applauded.

Ms. Power called the resolution “a perfect example of why the U.S. policy of isolation toward Cuba was not working – or worse, how it was actually undermining the very goals it set out to achieve.”

But she also said that “abstaining on this resolution does not mean that the United States agrees with all of the policies and practices of the Cuban government.”

The Cuban foreign minister, Bruno Rodríguez, who came to the United Nations for the vote, thanked Ms. Power for the abstention and acknowledged the progress made so far in improved ties.

Nonetheless, Mr. Rodríguez devoted most of his prepared remarks to criticizing the embargo and exhorting the Obama administration to do more.

“The human damages caused by the blockade are incalculable,” he said in the official English translation of his remarks. “There isn’t any Cuban family or sector in our country that has not suffered from its effects.”

He mused that under other changes the administration has decreed regarding Cuba — some only a few weeks ago — Americans who visit can bring home Cuban products with no limit in value, including rum and cigars. “However, the exports of those products to the United States continue to be banned,” Mr. Rodríguez said.

The Obama administration has taken a number of steps to ease the embargo’s effects, which have severely constrained Cuba’s economy. Under the relaxation, the United States has permitted some increased commerce, resumed regularly scheduled airline flights and eased limits on visits by tourists and family members.

But these measures have been done by executive power. The embargo can be annulled only by the Republican-led Congress, where support for it remains. The abstention at the United Nations effectively sharpens the confrontation between the administration and Congress over the issue.

Republican critics of Mr. Obama’s Cuba policy have repeatedly denounced what they call the administation’s capitulation to an authoritarian Communist government run for decades by Fidel Castro and later his brother, Raúl.

“In today’s U.N. vote, President Obama continues to side with #Castro regime instead of standing with the Cuban people,” Mario Diaz-Balart, a Florida Republican congressman and outspoken opponent of improved ties, said in a Twitter message.