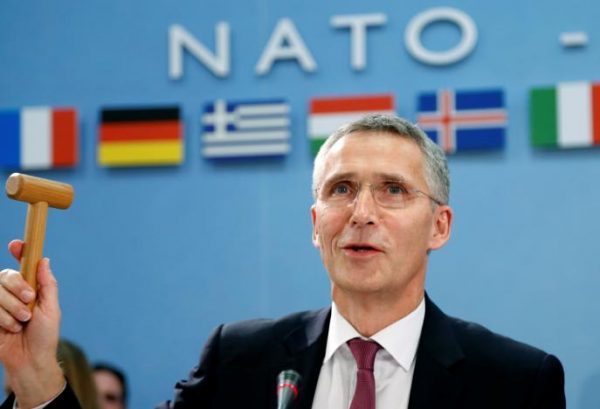 Britain said on Wednesday it will send fighter jets to Romania next year and the United States promised troops, tanks and artillery to Poland in NATO’s biggest military build-up on Russia’s borders since the Cold War.

In Madrid, the foreign ministry said Russia had withdrawn a request to refuel three warships in Spain’s North African enclave of Ceuta after NATO allies said they could be used to target civilians in Syria.

The ships were part of an eight-ship carrier battle group – including Russia’s sole aircraft carrier Admiral Kuznetsov – that is expected to join around 10 other Russian vessels already off the Syrian coast, diplomats said.

NATO Secretary-General Jens Stoltenberg said the troop contributions to a new 4,000-strong force in the Baltics and eastern Europe were a measured response to what the alliance believes are some 330,000 Russian troops stationed on Russia’s western flank near Moscow.

“This month alone, Russia has deployed nuclear-capable Iskander missiles to Kaliningrad and suspended a weapons-grade plutonium agreement with the United States,” Stoltenberg said, also accusing Russia of continued support for rebels in Ukraine.

Those ballistic missiles can hit targets across Poland and the Baltics, although NATO officials declined to say if Russia had moved nuclear warheads to Kaliningrad.

NATO’s aim is to make good on a July promise by NATO leaders to deter Russia in Europe’s ex-Soviet states, after Moscow orchestrated the annexation of the Crimea peninsula in 2014.

NATO’s plan is to set up four battle groups with a total of some 4,000 troops from early next year, backed by a 40,000-strong rapid-reaction force, and if need be, follow-on forces.

As part of that, U.S. Secretary of Defense Ash Carter announced a “battle-ready battalion task force” of about 900 soldiers would be sent to eastern Poland, as well as another, separate force equipped with tanks and other heavy equipment to move across eastern Europe.

Britain’s Defence Secretary Michael Fallon said Britain would send an 800-strong battalion to Estonia, supported by French and Danish troops, starting from May. The United States wants its troops in position by June.

London is also sending Typhoon fighter aircraft to Romania to patrol around the Black Sea, partly in support of Turkey.

“Although we are leaving the European Union, we will be doing more to help secure the eastern and southern flanks of NATO,” Fallon said.

Others NATO allies joined the four battle groups led by the United States, Germany, Britain and Canada to go to Poland, Lithuania, Estonia and Latvia. Canada said it was sending 450 troops to Latvia, joined by 140 military personnel from Italy.

Germany said it was sending between 400 and 600 troops to Lithuania, with additional forces from the Netherlands, Norway, Belgium, Croatia and Luxembourg.

Stoltenberg said allies’ commitments would be “a clear demonstration of our transatlantic bond.” Diplomats said it would also send a message to Republican presidential nominee Donald Trump, who has complained that European allies do not pay their way in the alliance.

For the Kremlin, the U.S.-led alliance’s plans are already too much given Russia’s grievances at NATO’s expansion eastwards, although Stoltenberg denied going too far.

But NATO’s troop announcements in the Baltic states and Poland were partly overshadowed by the dispute about whether Spain should refuel the Russian warships, which was later resolved by Moscow’s decision to withdraw its request.

NATO’s tensions with Russia have been building since Crimea and the West’s decision to impose retaliatory sanctions.

But the breakdown of a U.S-Russia brokered ceasefire in Syria on Oct. 3, followed by U.S. accusations that Russia has used cyber attacks to disrupt the presidential election, have signaled a worsening of ties.

Even before the break down of the Syrian ceasefire, Russian President Vladimir Putin suspended a treaty with Washington on cleaning up weapons-grade plutonium, signaling he was willing to use nuclear disarmament as a new bargaining chip in disputes with the United States over Ukraine and Syria.