Pakistan: Gunmen kill 59 in attack on police academy in Quetta 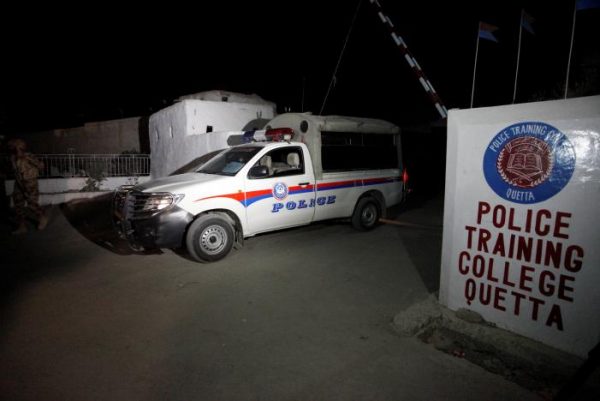 A police truck is seen at a gate to the Police Training Center after an attack on the center in Quetta, Pakistan October 25, 2016. REUTERS/Naseer Ahmed
Share:

At least 59 people were killed and 117 critically wounded when gunman stormed a Pakistani police training academy in the southwestern city of Quetta, government officials said on Tuesday.

Some 200 trainees were stationed at the facility when the attack occurred late on Monday, officials said, and some were taken hostage during the attack which lasted five hours.

Most of the dead were police cadets.

Mir Sarfaraz Bugti, home minister of Baluchistan province, of which Quetta is the capital, had confirmed early on Tuesday that five to six gunmen had attacked a dormitory inside the training facility while cadets rested and slept.

No group immediately claimed responsibility for the attack, but one of the top military commanders in Baluchistan, General Sher Afgun, told media that calls intercepted between the attackers and their handlers suggested they were from the sectarian militant group, Lashkar-e-Jhangvi.

Lashkar-e-Jhangvi, whose roots are in the heartland Punjab province, has a history of carrying out sectarian attacks in Baluchistan, particularly against the minority Hazara Shias. It was unclear what motive the group would have in attacking the police academy, a home ministry official said.

Police, military and paramilitary personnel arrived at the training center within 20 minutes of the attack and launched an operation which last around five hours, the home ministry said.

A Reuters photographer at the scene said authorities carried out the body of a teenaged-boy who they said was one of the attackers and had been shot dead by security forces.

Monday night’s assault was the deadliest in Pakistan since a suicide bomber killed 70 people in an attack on mourners gathered at a hospital in Quetta in August.

The bomber struck as a crowd of mostly lawyers and journalists crammed into the emergency ward of the hospital to accompany the body of a prominent lawyer who had been shot and killed in the city earlier in the day.

Later, the attackers entered the center’s hostel where around 200 to 250 police recruits were resting, security officials said. At least three explosions were reported at the scene by local media.

Quetta has long been regarded as a base for the Afghan Taliban, whose leadership has regularly held meetings there in the past.

The Afghan Taliban’s new leader Haibatullah Akhundzada openly taught and preached at a mosque outside Quetta for 15 years, until May this year. Akhundzada’s predecessor Mullah Akhtar Mansour was killed by a U.S. drone strike while traveling to Quetta from the Pakistan-Iran border.

Baluchistan province is no stranger to violence, with separatist fighters launching regular attacks on security forces for nearly a decade and the military striking back..