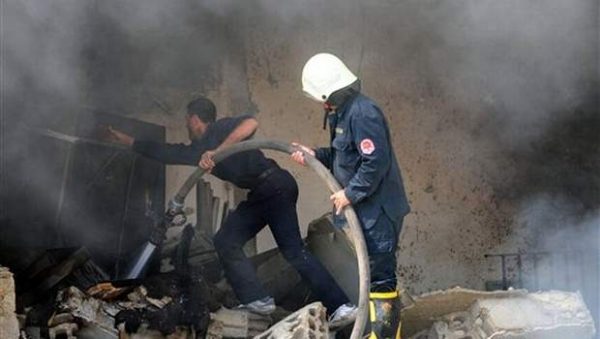 UNITED NATIONS (AP) — An international team has determined that the Syrian government carried out a third chemical attack in the conflict-wracked nation, according to a report released late Friday.

In August, the team from the United Nations and the chemical weapons watchdog blamed President Bashar Assad’s government for using chlorine gas in two attacks and Islamic State fighters for using mustard gas in one attack.

The team said at that time that three other attacks indicated possible government involvement.

In a report sent to the U.N. Security Council late Friday and seen by The Associated Press, the team said there was “sufficient evidence” to conclude that Syrian forces were responsible for one of the attacks in Qmenas in Idlib governorate on March 16, 2015.

It said a device, dropped from a high altitude, “hit the ground and released the toxic substance that affected the population.” Witnesses and hospital staff identified the smell and symptoms of chlorine gas.

The team concluded, however, that there wasn’t enough evidence to determine responsibility for the two other attacks.

The experts said they couldn’t confirm the use of barrel bombs in Kfar Zita in Hama governorate on April 18, 2014, because the remnants of the device allegedly used had been removed and couldn’t be linked with certainty to the location.

They said additional witnesses corroborated that a canister with traces of chlorine was found in Binnish in Idlib governorate on March 24, 2015. But they said the exact time and location couldn’t be established and the canister couldn’t be linked to any of the incident locations.

The United States, Britain and France want the U.N. Security Council to impose sanctions on the Assad regime for using chemical weapons. But Russia, Syria’s closest ally, said the evidence presented in the August report was not conclusive, and Russia’s U.N. Ambassador Vitaly Churkin indicated that Moscow will oppose any sanctions.

The Security Council is expected to discuss the report on Thursday.

A year ago, the council established the Organization for the Prohibition of Chemical Weapons-United Nations Joint Investigative Mechanism, known as the JIM, to identify those responsible for chemical attacks in Syria.

The JIM investigated nine cases in seven towns where an OPCW fact-finding mission found that chemical weapons had likely been used.

According to the August report, the JIM found the Syrian government responsible for two chlorine attacks in Idlib governorate – one in Talmenes on April 21, 2014, and one in Sarmin on March 16, 2015.

It also said the Islamic State group was “the only entity with the ability, capability, motive and the means to use sulfur mustard” gas in Marea in Aleppo governorate near the Turkish border on Aug. 21, 2015. At the time, Islamic State fighters were attacking rebels.