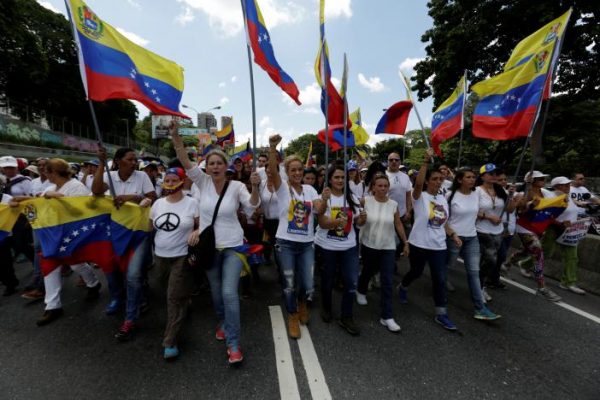 Led by women dressed in white, several thousand Venezuelans marched through Caracas on Saturday in the first of what the opposition hopes will be growing protests against the quashing of a referendum to remove President Nicolas Maduro.

The opposition coalition, seeking to end 17 years of socialism in the South American OPEC nation, says this week’s suspension of its drive for a plebiscite against the unpopular leader shows Venezuela has abandoned democracy.

“We’re here to demand respect for the constitution, for Venezuelans to have elections to escape dictatorship,” said human resources worker Nayiber Bracho, 35, marching under a hot sun in a crowd with banners, whistles and pets.

The marchers closed one lane of a major highway.

They were headed by Lilian Tintori and Patricia Gutierrez, both wives of jailed political leaders and advocates of hardline tactics against the government.

“There’s no obstacle that can defeat Venezuelan mothers, fighting for the future of their children,” said Tintori, who has called for civil disobedience in Venezuela, saying democratic options are lacking.

Despite sitting on the world’s biggest oil reserves, Venezuela is undergoing an unprecedented economic crisis, with many people skipping meals amid shortages and soaring prices.

Polls showed the majority wanted the recall referendum, but the election board halted the process this week citing court orders based on government allegations of fraud during an initial signature drive.

That left Maduro, who won an election to succeed Hugo Chavez in 2013, on track to complete the six-year term.

Government officials have been exulting at the referendum’s failure, saying the opposition is to blame for delaying the process and then committing fraud by adding names of minors and dead people to their first signature drive.

“Under no circumstances are we going to let them overthrow the government,” Socialist Party second-in-command Diosdado Cabello said at a press conference later on Saturday.

Maduro, a former bus driver and union leader narrowly elected three years ago after Chavez died from cancer, has seen his popularity tumble to just above 20 percent.

While foes blame failed socialist policies for the crisis, Maduro points to the steep slump in oil prices and accuses the United States of leading an “economic war” against his government.

Saturday’s march was to be followed by a special session on Sunday of the National Assembly, which the opposition won in December elections. Then the Democratic Unity coalition has promised nationwide rallies dubbed “The Takeover of Venezuela” for Wednesday.