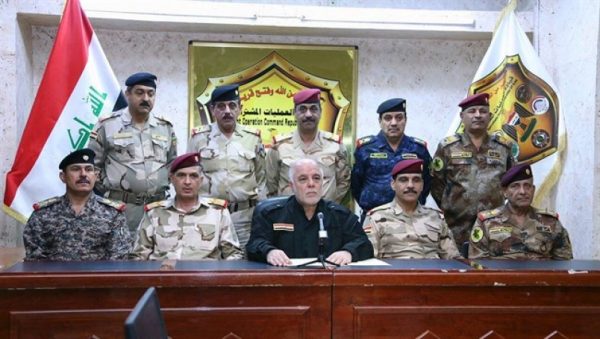 This photo released on his official Facebook page shows Iraqi Prime Minister Haider al-Abadi, center, surrounded by top military and police officers as he announces the start of the operation to liberate the northern city of Mosul from Islamic State militants early Monday, Oct. 17, 2016. The push to retake Mosul will be the biggest military operation in Iraq since American troops left in 2011 and, if successful, the strongest blow yet to the Islamic State. (Iraq Prime Minister’s office via AP)
Share:

Iraq’s Prime Minister Haider al-Abadi on Monday announced the start of an offensive to retake Mosul, the capital of Islamic State’s so-called caliphate in Iraq.

“I announce today the start of the heroic operations to free you from the terror and the oppression of Daesh,” he said in a speech on state TV, using an Arabic acronym for Islamic State.

“We will meet soon on the ground of Mosul to celebrate liberation and your salvation,” he said, surrounded by the armed forces’ top commanders.

The assault on Mosul is backed by the U.S.-led coalition and could be one of the biggest military operations in Iraq since the 2003 U.S.-led invasion that toppled Saddam Hussein.

“We are proud to stand with you in this historic operation,” Brett McGurk, U.S. envoy to the coalition against Islamic State, said on Twitter at the start of the Mosul offensive.

Mosul is the last major stronghold of the ultra-hardline Sunni group in Iraq. Islamic State fighters are dug in, and they have forced civilians to stay in harm’s way during previous battles.

Russian President Vladimir Putin said on Sunday he hoped the United States and its allies would do their best to avoid civilian casualties in an attack on Mosul.

With a pre-war population of around 2 million, the northern Iraqi city is the largest city that Islamic State has controlled.

In 2014, Islamic State leader Abu Bakr al-Baghdadi proclaimed from Mosul’s Grand Mosque a “caliphate” in Iraq and neighboring Syria, meaning an Islamic state with himself its absolute ruler.

Speaking in the early hours of Monday, Abadi sought to allay fears that the operation would turn into sectarian bloodletting, saying that only the Iraqi army and police would be allowed to enter the mainly Sunni city.

“The forces that lead the liberation operation are the brave Iraqi army with the police forces,” Abadi said. “They will enter the city and no one else.”

The Iraqi army dropped tens of thousands of leaflets over Mosul before dawn on Sunday, warning residents that the offensive to recapture the city was imminent. The leaflets carried several messages, one of them assuring the population that advancing army units and air strikes “will not target civilians” and another telling them to avoid known locations of Islamic State militants.

Iraq has also launched a radio station to help Mosul residents stay safe during the offensive.

The radio is broadcasting from Qayyara, a town 60 kilometers (about 40 miles) south of Mosul where the army massed forces ahead of the offensive.

Qayyara also has an airfield that will be used as a hub by the U.S.-led coalition to support the offensive, in which Kurdish Peshmerga and Sunni tribal fighters are expected to take part. 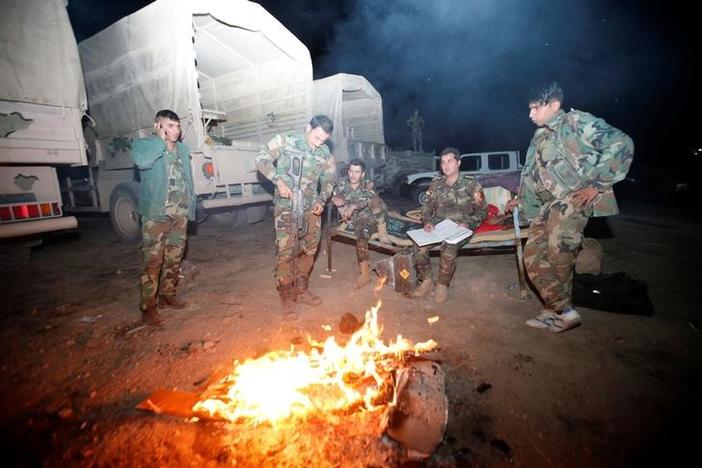