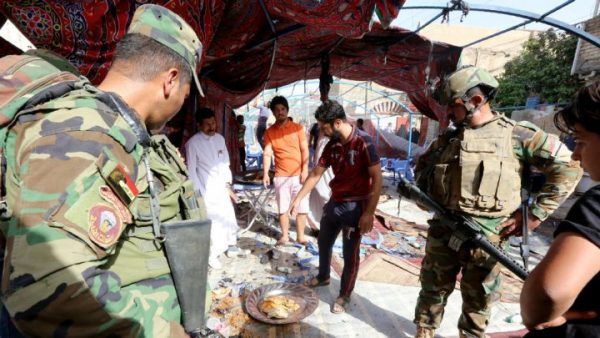 © SABAH ARAR, AFP | Iraqis, including security forces, inspect the damage at the site of a suicide bombing that targeted Shiite Muslims on October 15, 2016 in the Shaab area of the Iraqi capital Baghdad.
Share:
A suicide bombing claimed by the Islamic State group killed at least 34 people in Baghdad on Saturday, the deadliest attack in the Iraqi capital in more than three months.

The blast is the latest in a series of IS-claimed attacks targeting members of Iraq’s Shiite Muslim majority in the city that have left more than 60 people dead in less than three weeks.

The latest bombing, which targeted a funeral tent where mourners were gathered to pay their respects in the Shiite-majority Shaab area of north Baghdad, also wounded at least 36 people, officials said.

IS issued an online statement claiming the attack, saying it was carried out by a man who detonated an explosive vest.

A witness said the bomber entered the funeral tent and blew himself up as lunch was being served.

“I saw with my eyes 20 martyrs on the ground,” the witness said.

Blood stained the ground at the scene of the attack, which was littered with the remains of plastics chairs in which mourners had been seated.

IS, a Sunni extremist group, considers Shiites to be heretics, and frequently carries out suicide bombings and other attacks against them in Baghdad and elsewhere in the country.

Saturday’s bombing is the deadliest to hit the Iraqi capital since early July, when a suicide bombing in central Baghdad sparked infernos in a crowded shopping area, killing more than 300 people.

That attack led to a shakeup of senior Baghdad security officials and the announcement of other measures aimed at improving security in the capital, but the bombings have continued.

IS has claimed several recent bombings targeting Shiites in Baghdad, including one on October 9 that killed at least five people.

Two more IS-claimed bombings in Baghdad earlier in the month left a total of at least 10 dead, while two others killed at least 17 people at the end of September.

The attacks come as Iraqi forces prepare for an offensive in northern Iraq to retake Mosul, the last IS-held city in the country, after regaining much of the territory the jihadists seized in 2014 and 2015.

The launch of the operation is expected to be announced soon, but it will mark only the start of a battle that is likely to be the most difficult and complex yet in the war against IS.

Once the battle is announced, a coalition of heterogenous and sometimes rival Iraqi forces will have to fight their way through IS defences to reach the city, in some cases over distances of dozens of kilometres (miles).

Then they will likely seek to surround the city before launching an assault, marking the start of deadly street fighting with die-hard jihadists in a city with a large civilian population.

The battle may spark a humanitarian crisis, with the United Nations warning that up to one million people may be displaced by the fighting as winter sets in.

Even the recapture of Mosul will not mark the end of the war against IS, which still holds other territory in Iraq and is likely to turn increasingly to insurgent tactics such as bombings and hit-and-run attacks as it loses more ground.