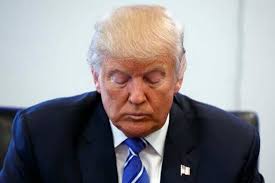 The new accusations threatened to do further damage to a candidacy that is already in big trouble
By CRISTIANO LIMA
Donald Trump is facing a blizzard of fresh allegations of sexual impropriety, days after denying during Sunday’s presidential debate that he had ever groped women.

At least four women came forward in stories published Wednesday to say — on the record — that the Republican nominee had touched them inappropriately.

In an explosive new report by The New York Times, two woman said that Trump made unwanted sexual advances during incidents decades apart. His campaign is denying the story as “fiction.”

A third woman, 36-year-old Mandy McGillivray, accused Trump, in an interview with the Palm Beach Post, of grabbing her posterior 13 years ago. The Trump campaign has not commented on that allegation.

Later Wednesday, People Magazine writer Natasha Stoynoff published an article accusing Trump of forcibly kissing her prior to an interview with him and wife Melania Trump at his Mar-a-Lago resort in 2005. (A Trump spokeswoman said the account was “fabricated.”)

“We walked into that room alone, and Trump shut the door behind us,” Stoynoff recalled. “I turned around, and within seconds, he was pushing me against the wall, and forcing his tongue down my throat.”

Stoynoff, who says she was left feeling “badly shaken from the incident,” said the innuendo did not stop there.

Also Wednesday, CBS News unearthed footage from a 1992 “Entertainment Tonight” Christmas special that shows Trump talking to a young girl on an escalator at Trump Tower, then turning to the camera to say, “I am going to be dating her in 10 years. Can you believe it?”

Earlier, BuzzFeed reported that four women who participated in Trump’s Teen USA beauty pageants said he would frequently barge into their dressing areas as they were changing.

The reports, all arriving with hours of one another, threatened to further damage a candidacy that that is already reeling in the aftermath of Friday’s publication of a 2005 recording of Trump boasting about grabbing women’s genitals and kissing them against their will.

Trump apologized for those comments, but described them as “locker room talk” and said when questioned by debate moderator Anderson Cooper that he had never actually groped women.

Polls taken since the video emerged show Trump losing considerable support in the presidential race against Democrat Hillary Clinton, as Republicans in down-ballot contests scrambled to distance themselves from their own party’s nominee.

The new accusations are striking in that they seem to have come expressly in reaction to Trump’s denial during Sunday’s debate.

Jessica Leeds, 74, a former traveling businesswoman, told the New York Times that Trump grabbed her breasts and attempted to reach up her skirt as they sat side-by-side during a flight headed to New York.

“He was like an octopus,” Leeds said. “His hands were everywhere.”

Leeds, who recently watched the second presidential debate where Trump denied ever assaulting women — despite the release of a video recording last Friday capturing him bragging on a hot mic about groping women’s genitals — said she was enraged by his denial.

“I wanted to punch the screen,” Leeds said. “It was an assault.”

Rachel Crooks, a former receptionist for a company in Trump Tower, told the Times that Trump tried to kiss her during a chance encounter on an elevator inside the building in 2005. Crooks, who was 22 years old at the time, recognized the real estate mogul and introduced herself with a handshake. From there, Crooks said, Trump refused to let go of her hand and instead began to kiss her cheeks.

Then, she said, he “kissed me directly on the mouth.”

“It was so inappropriate,” Crooks told the Times. “I was so upset that he thought I was so insignificant that he could do that.”

The Trump campaign was quick to deny the report as “fiction,” calling it and other stories alleging that Trump behaved inappropriately toward women a “coordinated character assassination against Mr. Trump” in a statement released by senior communications adviser Jason Miller.

“To reach back decades in an attempt to smear Mr. Trump trivializes sexual assault, and it sets a new low for where the media is willing to go in its efforts to determine this election,” Miller said. “It is absurd to think that one of the most recognizable business leaders on the planet with a strong record of empowering women in his companies would do the things alleged in this story, and for this to only become public decades later in the final month of a campaign for president should say it all.”

Miller went on to accuse the Times of deliberately seeking to bury recent stories about the recent WikiLeaks release of emails from Clinton campaign chair John Podesta, calling the story a “political attack” made “on behalf of Hillary Clinton’s candidacy.”

Asked directly about the two women’s claims by the Times, Trump staunchly denied the accusations.

“None of this ever took place,” Trump said in a phone interview, going on to call the Times reporter asking the questions “a disgusting human being.”

“He said that The Times was making up the allegations to hurt him and that he would sue the news organization if it reported them,” the Times reported.

“This disturbing story sadly fits everything we know about the way Donald Trump has treated women,” Clinton’s communications director Jennifer Palmieri said in a statement. “These reports suggest that he lied on the debate stage and that the disgusting behavior he bragged about in the tape is more than just words.”

The Trump campaign did not comment on BuzzFeed’s allegations, but campaign manager Kellyanne Conway was asked about it during an appearance on CNN, repeatedly ducking questions from the network’s Brianna Keilar.

“We never want to talk to the women shamed and blamed by Hillary Clinton because they had sexual contact with her husband. Some consensual long-time affairs, including in the White House, and others victims of predatory conduct,” Conway said.

Shortly after midnight on Thursday, the Trump campaign emailed reporters a letter that a lawyer representing Trump had sent to Times Executive Editor Dean Baquet.

“Your article is false, defamatory, and constitutes libel per se,” the letter reads. “Clearly, The New York Times is willing to provide a platform to anyone wishing to smear Mr. Trump’s name and reputation prior to election irrespective of whether the alleged statements have any basis in fact.”

The letter concludes by demanding that Baquet retract the article and remove it from the newspaper’s website, and issue “a full and immediate retraction and apology. Failure to do so will leave my client with no option but to pursue all available actions and remedies.”