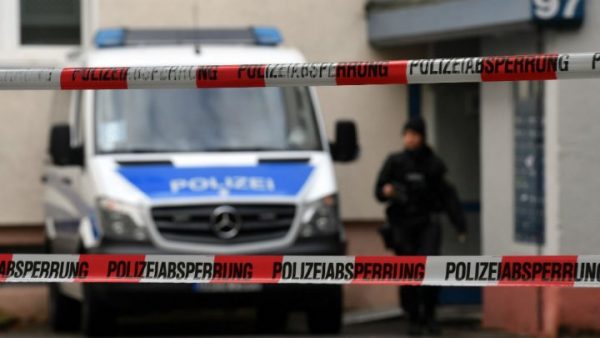 A Syrian man suspected of plotting a bomb attack was apprehended by three of his countrymen, who overpowered him, tied him up in their apartment, and then alerted police, authorities said on Monday.

The overnight arrest of Jaber A. ended a nearly two-day nationwide search for the 22-year-old that German authorities launched after finding several pounds of explosives and components hidden inside an apartment in the eastern city of Chemnitz on Saturday.

Jaber A. arrived in Germany amid a flood of 890,000 asylum seekers last year. Saxony criminal police chief Joerg Michaelis said that the three Syrians who captured him recognised the suspect from wanted posters police posted online as part of the manhunt.

After taking him to their apartment late Sunday night, two of the Syrians bound and held Jaber A. while the third brought a mobile phone photo of the suspect to a local police station, leading to the arrest early Monday, Michaelis said.

Prosecutors and police said Monday that they considered Jaber A. an extremist with likely links to the Islamic State (IS) group. Germany’s domestic intelligence agency had been watching him since September and alerted Saxony authorities about his alleged possible plot on Friday, authorities said.

When police raided the apartment in the city of Chemnitz where he was thought to be staying on Saturday, Jaber A. was able to flee. Inside the apartment they found 1.5 kilograms (3.3 pounds) of “extremely dangerous explosives” and components, according to federal prosecutors.

Criminal police chief Michaelis said that, at this stage of the investigation, “the behaviour and actions of the suspect currently speak for an IS context”. He didn’t elaborate.

A security official said there was no indication yet that Jaber A. was being directed by the IS group, but that investigators still were combing through seized evidence. The official wasn’t authorised to discuss the investigation publicly and so spoke on condition of anonymity.

Police said it was not clear when and how the suspect met up with his three countrymen in Leipzig, about 80 kilometres (50 miles) from Chemnitz, or if they already knew him.

They would not release any further information about the three Syrians who apprehended Jaber A. If the signs of his having an extremist background were substantiated, “the people who gave the tip are of course in danger”, the police chief said.

Federal prosecutors, who handle terrorism investigations in Germany, said in a statement Monday they currently have no indications that a target already had been chosen for an attack.

A 33-year-old Syrian at whose Chemnitz apartment police found the hidden explosives was arrested over the weekend and is considered a co-conspirator in the alleged bomb plot, prosecutors said.

He was identified only as Khalil A. in keeping with German privacy laws. Jaber A.’s full identity and photograph had been released while he was on the run and being sought.

The explosives were described as similar to the ones used in the deadly November 13 attacks in Parisand the March 22 attacks in Brussels. Known as TATP, or triacetone triperoxide, it is fairly easy to make and detonate, police said.

“According to everything we know today, the preparations in Chemnitz are similar to the preparations for the attacks in Paris and Brussels,” German Interior Minister Thomas de Maiziere said.

A bomb squad destroyed the explosives Saturday in a pit outside the five-story apartment building because they were considered too dangerous to transport.

The incident comes amid ongoing concerns about the flood of asylum seekers that entered Germany last year and increasing support for populist parties with anti-migrant rhetoric.

The country also has been on edge since two attacks in July carried out by asylum seekers and claimed by the IS group, in which multiple people were injured and the assailants were killed.