Trump did business with Iranian bank linked to Lebanon’s Hezbollah 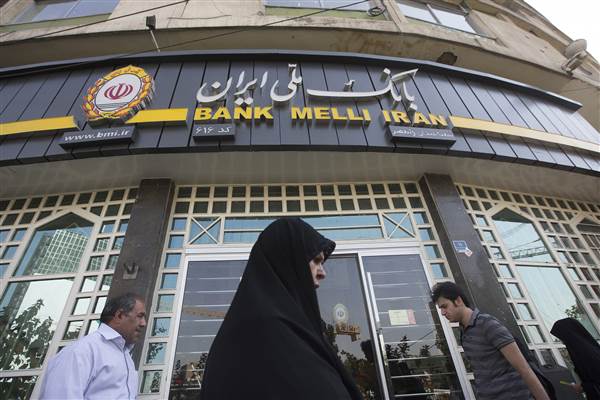 Donald Trump reportedly did business with an Iranian bank that U.S. authorities have accused of close links to Iran’s Quds Force, the elite arm of the Iranian Revolutionary Guards that allegedly funds militant groups Hamas and Hezbollah.

The Republican presidential candidate counted Iran’s Bank Melli as a customer between 1998 and 2003, when his real estate organization rented 8,000 feet of New York office space to the bank on the 44th building of the General Motors building, according to public records reviewed by the International Consortium of Investigative Journalism (ICIJ).

The Trump Organization kept the financial institution on as a customer for four years after the U.S. Treasury designated it as controlled by the Iranian government in 1999.

U.S. officials later alleged in 2007 that the bank was being used to obtain materials for Tehran’s nuclear program and to funnel money to the Quds Force, a unit that is tasked with protecting Iran from external threats and has been accused of sponsoring extremist attacks between 2002 and 2006.

Iran funds and supports several groups across the Middle East that are designated as extremist organizations in the West, such as Hamas in the Gaza Strip and the Lebanese Shiite militant group Hezbollah in Lebanon and the Houthi rebels in Yemen.

Newsweek’s cover story last month highlighted Trump’s secretive web of business ties to foreign states and organizations that could complicate his decision-making as commander-in-chief because of potential conflicts of interest.

While the U.S. had sanctions in place to prevent dealings with the Iranian regime, such as renting property, some Iranian businesses could obtain special licenses that would exclude some transactions from the sanctions. It remains unclear if the U.S. Treasury had authorized such a license for Bank Melli to rent at the building. The Treasury, Bank Melli and the Trump Organization all have refused to comment.

“It’s a pretty hypocritical position to take,” Richard Nephew, who served from 2013 to 2015 as principal deputy coordinator of sanctions policy at the U.S. State Department and worked on Iranian sanctions in George W. Bush and Barack Obama’s administrations, told ICIJ. “It suggests that his principles are pretty flexible when it comes to him getting paid.”

On the campaign trail, Trump has railed against Iran and its conservative leadership over the landmark nuclear deal Tehran signed with world powers in July 2015 and their threats to Israel’s security. He has referred to the country as a “big enemy.”

Last month, he said that if he is not elected U.S. president then Israel would cease to exist as a country because of the nuclear agreement, which lifted sanctions on the Islamic republic’s economy in return for the pulling back of Iran’s uranium enrichment programme. He said that the lifting of sanctions would boost Iran’s economy and “destroy Israel.”

Iran’s highest religious authority Ayatollah Ali Khamenei has taken aim at Trump as well, pledging to burn the nuclear deal if the next U.S. president made attempts to breach or end the deal.

The barb appeared to be in response to Trump’s speech at the lobby group American Israel Public Affairs Committee (AIPAC) in March where he said that his “number one priority is to dismantle the disastrous deal with Iran.”