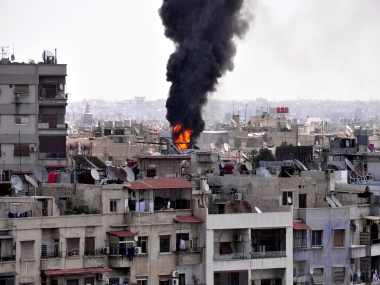 Mortar shells slammed into several areas of the Syrian capital on Tuesday, with one hitting near the Russian embassy without causing injuries. AFP
Share:
The Russian foreign ministry said Tuesday its embassy compound in Damascus came under shelling from rebel groups the previous day.

One mortar landed near the residential compound and two more by the embassy building, the ministry said, adding that no one was harmed. It blamed the shelling on two rebel groups, including al Qaeda’s affiliate in Syria formerly known as the Nusra Front, but also claimed the attack was the result of a U.S. policy and that of its allies, which “provokes further bloodshed in Syria.”

The Russian Embassy compound in Damascus has been attacked previously, always with no reported injuries.

As diplomatic relations between Washington and Moscow deteriorate and the fighting worsens in the Syrian civil war, U.S. Secretary of State John Kerry insists the U.S. isn’t abandoning its pursuit of peace there despite suspending U.S.-Russian talks on a cease-fire.

But he isn’t outlining any new strategy to replace efforts with the Russians.

Kerry says Washington and Moscow will still discuss Syria as part of larger multilateral negotiations. And they’ll make sure their warplanes in Syria don’t cross paths.

But Kerry says the U.S. is outraged that Russia has turned a blind eye to the Syrian government’s use of chlorine gas and barrel bombs.

He says Russia has rejected diplomacy and chosen to pursue a military victory over rebels.

Also Tuesday, activists raised the death toll from a suicide bombing at a Kurdish wedding in the northeastern city of Hasakah the previous night to at least 34 dead. The attack was claimed by Islamic State of Iraq and Syria (ISIS,) which said its fighter had targeted a gathering of a Kurdish political party, without mentioning a wedding celebration.

Issam Amin, a local media activist, said a teenager detonated an explosive vest when he was stopped by men at the entrance of the wedding’s reception. The Britain-based Syrian Observatory for Human Rights, which tracks the civil war through a network of activists on the ground, said 11 of the fatalities were children.

The attacks underscore the chaos of the Syrian conflict. The civil war has lately focused around Aleppo, where the situation deteriorated considerably since the collapse of a U.S.-Russia-brokered cease-fire two weeks ago. There are several other fronts open between rebels and the government across the country, while ISIS continues to stage large-scale attacks against all sides of the conflict.

Tuesday’s shelling on the city university’s School of Sciences killed two students, according to the Observatory while state media put the toll at six dead and 47 wounded.

Rebels said pro-government forces were attacking the city from the south in a bid to penetrate its opposition-controlled areas, where the U.N. estimates 275,000 people are trapped in a government siege. The Islamic Front rebel coalition said on Twitter that its factions repelled an advance on the Sheikh Saeed neighborhood.

The Observatory said the government offensive is accompanied by airstrikes on the contested neighborhoods. The monitoring group says 420 civilians have been killed in and around Aleppo since the collapse of the cease-fire, mainly in the rebel-held east of the embattled city.

Health facilities and hospitals have come under repeated attack in the offensive, prompting global outcry.

In Geneva, the U.N. human rights chief decried an unfolding “calamity” in Aleppo and condemned the Security Council for scuttling resolutions that would prohibit war crimes.

Zeid Ra’ad al-Hussein said the Security Council should adopt rules to limit veto use by its five permanent members in cases of war crimes, crimes against humanity, or genocide. The U.S., France, Britain, as well as several U.N. officials have warned that Russia and the Syrian government’s actions in the war could amount to war crimes.

International efforts to end the fighting have been dealt another serious blow on Monday, after the United States suspending direct contacts with Russia on halting the war in Syria, underscoring the deep mistrust between the two powers.

The move is likely to scuttle any chances of delivering desperately needed humanitarian aid to besieged communities and of breathing new life into moribund Syria peace talks.

Meanwhile, U.N. Secretary General Ban Ki-moon called on the U.S. and Russia to resume talks on a Syria truce. Ban told reporters in Strasbourg, France, on Tuesday that he is set to hold talks soon with Kerry and senior Russian officials in Brussels.

“I will strongly urge (them) to resume their negotiations so that there will be a cessation of hostilities,” Ban said, adding that a cease-fire is vital to supply aid to the besieged city of Aleppo and give space for political talks to start.