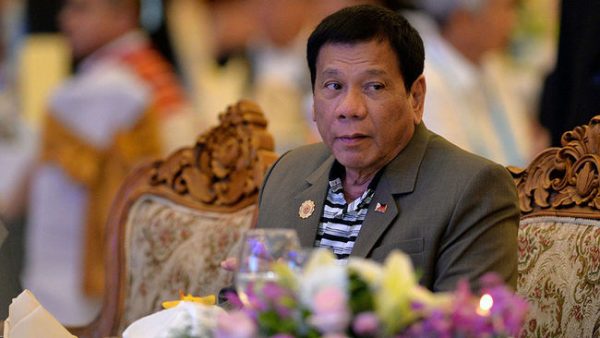 A witness said that Philippine President Rodrigo Duterte, when he was still a city mayor, ordered him and other members of a squad to kill criminals and opponents in gangland-style assaults that left about 1,000 dead
Share:

U.S. officials are doing their best to ignore Philippine President Rodrigo Duterte’s hostile rhetoric and taking comfort in the fact that he has yet to translate his words into less military cooperation.

The United States is trying not to give the new Philippine president, who recently appeared to liken himself to Hitler, a pretext for further outbursts while at the same time pressing ahead with military and other cooperation at lower levels, U.S. officials said on Monday.

Two U.S. officials said that while an open break with Manila would create problems in a region where China has grown increasingly aggressive, there are no serious discussions about taking punitive steps such as cutting aid to the Philippines.

Mindful of anti-colonial sentiment, despite the estimated 3 million people of Philippine descent living in the United States, U.S. officials do not want to say or do anything that might encourage Duterte to turn his rhetoric into reality.

“He is like Mr. Trump,” a senior Southeast Asian official said, referring to U.S. Republican presidential nominee Donald Trump. “He craves attention, and the more he gets, the more outrageous he becomes. It is wisest to ignore him.”

In the last month, Duterte has appeared to call U.S. President Barack Obama a “son of a bitch,” leading the White House to cancel a planned meeting, and to liken himself to Hitler, saying he would “be happy” to kill 3 million drug users and peddlers in the country.

Duterte said he regretted using that language to describe Obama and apologized to the Jewish community for his references to the Holocaust.

In his latest broadside, Duterte on Sunday said he got expressions of support from Russian Prime Minister Dmitry Medvedev and from an unnamed Chinese official after he complained of ill-treatment by Washington.

While Duterte has publicly suggested he would end joint military exercises, push U.S. special operations forces out of the southern Philippines, and review a defense pact signed two years ago, U.S. officials stressed none of this has happened.

U.S. military officials said they were well aware of Duterte’s comments, but their counterparts in the Philippines had reassured them that business continues as usual.

“No one is really losing sleep over it,” said one U.S. defense official on condition of anonymity.

“It is all bluster,” said a second defense official, saying Duterte’s remarks “have not bled over into our world.”

There are about 100 U.S. soldiers in Zamboanga City, a Philippine military spokesman said, well below the 1,200 U.S. forces initially deployed to help train and advise local troops fight the Abu Sayyaf Group, an Islamist militant group.

The Philippine military spokesman said he was not aware of any plan to pull them out.

Other than Japan’s 1942-1945 occupation, the United States effectively ruled the Philippines from 1898, when it acquired the island chain from Spain following the Spanish-American War, until recognizing its independence in 1946.

The two nations signed a mutual defense treaty in 1951, but their close cooperation diminished a quarter century ago, when the Philippines kicked U.S. forces out of two large military installations, including the naval base at Subic Bay.

Two years ago, however, the two signed the Enhanced Defense Cooperation Agreement (EDCA), which allows U.S. troops to build storage facilities for maritime security and humanitarian and disaster response operations.

Under the agreement, two C-130 transport planes and 100 U.S. servicemen have been at an air base in the central Philippines since Sept. 25 as part of a two-week exercise.

Commander Gary Ross, a Pentagon spokesman, said the EDCA is an international agreement, and the United States and Philippines are bound by international law. Citing the agreement’s text, Ross said it has an initial term of 10 years, after which either side may end it with a year’s written notice.

The former colony is a key element of the Obama administration’s policy of “rebalancing” its foreign policy toward Asia, and the two nations have begun joint patrols in the South China Sea as China asserts its territorial claims.

China claims 90 percent of the South China Sea, which is believed to be rich in oil and gas, its claims overlapping with those of the Philippines, Brunei, Malaysia, Vietnam and Taiwan.

U.S. officials are disturbed by the fact that more than 3,100 people have been killed since Duterte took office three months ago and launched a promised drugs war, yet they value the country’s long-standing military ties.

“Sometimes you have to hold your nose about the individuals and deal with the countries. The United States doesn’t have the luxury of writing off the Philippines, so we have to find a way to deal with this extraordinarily distasteful leader while still conveying our opposition to his human rights policies,” said Frank Jannuzi, a former Senate Foreign Relations Committee Asia specialist now at the Maureen and Mike Mansfield Foundation.

U.S. lawmakers have conveyed their concerns in repeated conversations with the Philippine Embassy, where diplomats are torn between their need to represent Duterte’s government and their concerns about what he has been saying.

The United States has sent the Philippines hundreds of millions of dollars in foreign aid and military and development assistance in recent years, making it the third-largest Asian recipient of U.S. military aid after Afghanistan and Pakistan.

One U.S. official said that while the Obama administration is more worried about Duterte that it is letting on publicly, there is no great concern about the defense implications of a political break because the United States has alternatives.

The official, who spoke on condition of anonymity, said these include the Navy Region Center Singapore, training facilities in Brunei, and the possibility of greater naval access in Vietnam.