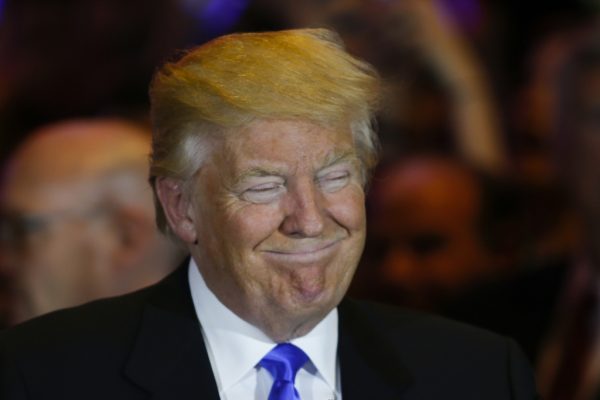 Donald Trump may have a major tax scandal on his hands, with an October surprise report suggesting that the Republican presidential candidate may have avoided paying any federal income taxes for close to two decades.
Share:
It took less than a day for October to produce an “October surprise.”

Donald Trump reported a nearly $1 billion loss on his 1995 tax returns and could therefore have avoided paying federal income taxes for almost two decades, the New York Times reported on Saturday, putting another unexpected exclamation point on what had already been one of the worst weeks for any presidential nominee in recent memory.

The Times, which hired tax experts to analyze the records, determined that “tax rules that are especially advantageous to wealthy filers would have allowed Mr. Trump to use his $916 million loss to cancel out an equivalent amount of taxable income over an 18-year period” — more than $50 million a year.

Times reporter Susanne Craig received the documents, which the paper describes as “three pages from what appeared to be Mr. Trump’s 1995 tax returns,” in the mail from an unknown source. The documents were sent last month and postmarked New York City, with a return address of Trump Tower — the real estate mogul’s headquarters.

A statement from Trump’s campaign neither confirmed nor denied that he filed a $916 million loss in his 1995 tax returns, but charged that the documents were “illegally obtained” in what it said was “a further demonstration that the New York Times, like establishment media in general, is an extension of the Clinton Campaign, the Democratic Party and their global special interests.”

“Mr. Trump is a highly-skilled businessman who has a fiduciary responsibility to his business, his family and his employees to pay no more tax than legally required,” the statement, which was not attributed to Trump or any staffer by name, continued. “That being said, Mr. Trump has paid hundreds of millions of dollars in property taxes, sales and excise taxes, real estate taxes, city taxes, state taxes, employee taxes and federal taxes. Mr. Trump knows the tax code far better than anyone who has ever run for President and he is the only one that knows how to fix it.”

Trump’s refusal to release any tax returns, something every presidential nominee since Richard Nixon in 1972 has done, has been one of the larger clouds hanging over his campaign and one his Democratic opponent has sought to exploit.

It now appears as though the GOP nominee’s failure to come clean has backfired, with the Times drawing one of the same conclusions that Hillary Clinton offered as a possible explanation for Trump’s secrecy in last Monday’s debate — that he has paid little or no federal income tax for some time.

The story, which posted Saturday night just as Trump had taken the stage for a rally in Manheim, Pa., seemed to send the candidate, already reeling from a week that started with a bad debate and continued with a stream of recriminations over his treatment of a former Miss Universe in a 3 a.m. tweetstorm, spiraling at even greater velocity into a political abyss.

After taking the stage 102 minutes after the rally’s scheduled 7 p.m. start time, Trump veered off-script several times, impersonating Clinton’s near fall last month as she was suffering from pneumonia and asserting — after taking credit all week for his restraint in not bringing up Bill Clinton’s sexual improprieties at the debate — that she probably isn’t faithful to her husband anymore because, he said, “Why should she be?”

Trump’s allies, meanwhile, tried to shrug the story off by minimizing the importance of a partial tax return from a single year and characterizing it as just the latest attempt by a liberal media to hurt their candidate.

“The campaign sees this as another contrived story,” said a Republican operative who works with the Trump campaign. “More media carrying the Clintons’ water. If people don’t like him doing that then they should change the tax laws.”

While Trump is unlikely to lose many of his most ardent supporters, polls showed last Monday’s debate cost him dearly. GOP strategists, who had been buoyed by a narrowing of the race in September, have grown increasingly forlorn in the days following the debate, as Trump’s subsequent behavior seemed to underscore Clinton’s charge that he lacks the temperament to be commander in chief. They fear Saturday night’s surprise bombshell might lead voters to question another pillar of his candidacy — his claim to be a successful businessman and an anti-politician who, unlike the insiders he maligns in Washington, tells the truth.

“The confusion over the deductibility of losses over time is more than the average voter cares about. But the continuing debate over his taxes keeps him hoisted up on the petard of transparency,” said Bruce Haynes, a GOP strategist in Washington. “It is not fatal. But the Trump campaign has to find a way to drive a narrative of some substance against Clinton or his long term prospects are grim.”

Even that is unlikely, according to former Democratic National Committee official Mo Elleithee, who said the tax story was a “devastating body blow” that would “haunt him for the next five weeks.”

“The fundamental argument of his campaign,” Elleithee said, “is the little guy is getting screwed and I’m the guy who’s going to look after you. It is hard to make that argument when there is evidence now in front of everybody about how he has benefited personally, how he has gamed the system.”

Democrats have seized on the Times story, with the DNC blasting it out to its email list and officials from coast to coast tripping over themselves to provide comment.

Rick Palacio, the Democratic Party chairman of Colorado, where Clinton’s lead had shrunk in recent weeks, called the story “mind-boggling.”

“I don’t think that in itself it’s going to make a huge difference, but compound it with really the terrible week he’s had with Machado and the debate last week, all this is weighing him down to the point where he has nothing left to do but explain his past to the American people,” Palacio said.

For now, Trump is threatening what would likely be a protracted legal battle with the world’s most influential newspaper. A lawyer for Trump sent a letter to the Times describing the publication of the documents as illegal and threatening “prompt initiation of appropriate legal action,” according to the paper.

But the Times appears ready to do battle: CNN reported on Sept. 12 that Dean Baquet, the paper’s executive editor, told a Harvard University forum that he would risk prison, if necessary, to publish Trump’s tax returns.

Asked why by documentary filmmaker Laura Poitras, Baquet said the unauthorized publication of Trump’s tax records is in the public interest because he is “a presidential candidate whose whole campaign is built on his success as a businessman, and his wealth.”

“BOMBSHELL: Trump’s returns show just how lousy a businessman he is AND how long he may have avoided paying any taxes,” wrote press secretary Brian Fallon.

Campaign Manager Robby Mook said in a statement that the story “reveals the colossal nature of Donald Trump’s past business failures and just how long he may have avoided paying any federal income taxes whatsoever.”

Mook added: “He apparently got to avoid paying taxes for nearly two decades — while tens of millions of working families paid theirs. He calls that ‘smart.’ Now that the gig is up, why doesn’t he go ahead and release his returns to show us all how ‘smart’ he really is?”

POLITICO reported in June that in 1991 and 1993, Trump appeared to have paid “zero, or near-zero” in personal income taxes, citing records from New Jersey’s gambling authorities.

Asked at the time whether he had paid personal income taxes during those years, Trump responded simply, “Welcome to the real estate business.”

Tax experts said there is nothing surprising about the writeoffs Trump may have used to avoid paying federal income taxes for nearly two decades, and that the bigger question is what generated the large losses he reported.

Losses like the $916 million that Times said Trump claimed in 1995 could at that time be used to offset taxes in the three prior tax years and 15 years going forward. But it’s unknown at this point exactly how Trump accrued those losses, which he claimed during a ruinous financial time for his businesses, and how legitimate they were.

“Nobody thinks that’s wrong,” Howard Abrams, director of tax programs at the University of San Diego School of Law, said of the tax provisions Trump appears to have used. “The question is what generated the $900 million loss.”

Joe Thorndike, director of the Tax History Project at Tax Analysts, said: “Obviously the optics are less than ideal from a political standpoint. But on its face, using losses to offset gains is routine and uncontroversial. In fact, it’s part of what makes the income tax work as well as it does.”

The tax advantages that the real estate industry can exploit are well known to tax experts. For instance, Abrams said, while commercial real estate historically increases in value, owners can take deductions as if it were depreciating.

“It seems that Trump may have been part of Mitt Romney’s infamous ‘47 percent,’” Thorndike said. “But like many other nonpayers, his status could have been a function of deliberate tax policy decisions, not creative tax avoidance or sneaky ‘loopholes.’”

“If the deductions are overly favorable, they need to change the law,” he said.

Thorndike said he thinks Trump should disclose his tax returns, but he strongly criticized the leak to the Times.

“For the record, while I’m an advocate of voluntary tax disclosure by presidential candidates, I think leaks like this one are wrong,” he said. “If we want candidates to be compelled to disclose, we should change the law to require it (as Sen. Ron Wyden has proposed). Involuntary, illegal disclosure is not something anyone should applaud.”

During Monday’s presidential debate, Clinton attacked Trump for refusing to release his tax returns, which he said he will not disclose until an IRS audit of them is complete.

Clinton floated several alternate theories as to why Trump was refusing to release the documents, including, she said, because “maybe he doesn’t want the American people, all of you watching tonight, to know that he’s paid nothing in federal taxes.”

“The only years that anybody’s ever seen were a couple of years when he had to turn them over to state authorities when he was trying to get a casino license, and they showed he didn’t pay any federal income tax,” Clinton said.

“That makes me smart,” Trump retorted.