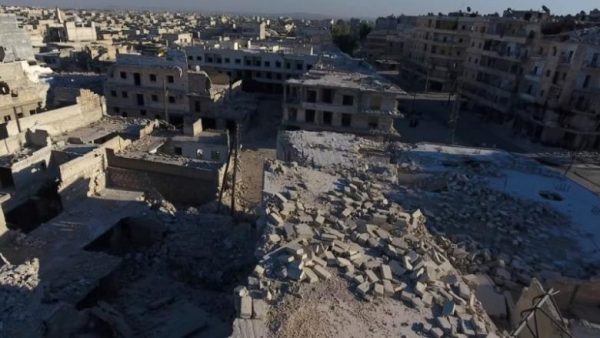 A still image taken on September 27, 2016 from a drone footage obtained by Reuters shows damaged buildings in a rebel-held area of Aleppo, Syria. Handout via Reuters TV
Share:
By Tom Perry and Angus McDowall
BEIRUT, Lebanon- Syrian government forces and their allies attacked the opposition-held sector of Aleppo on several fronts on Tuesday, the biggest ground assault yet in a massive new military campaign that has destroyed a U.S.-backed ceasefire.
The United States says the assault on Aleppo is proof that President Bashar al-Assad and his Russian and regional allies have abandoned an international peace process to pursue victory on the battlefield after nearly six years of civil war.

Washington, which agreed a ceasefire with Russia this month that collapsed after a week, says Moscow and Damascus are guilty of “barbarism” and war crimes for targeting civilians, health workers and aid deliveries in air strikes.

More than 250,000 civilians are believed to be trapped inside the besieged rebel-held sector of Aleppo, where intensive bombing over the past week has killed hundreds of people, many trapped under buildings brought down by bunker-busting bombs.

Only about 30 doctors are left inside, coping with hundreds of wounded each day who are being treated on the floors of hospitals that are bereft of supplies.

The World Health Organization called for the “immediate establishment of humanitarian routes to evacuate sick and wounded” from the besieged eastern part of the city.

Tuesday’s assault saw pro-government forces, which include the Syrian army and allied militia from Iran, Iraq and Lebanon, attempt to attack Aleppo’s Old City near its historic citadel, as well as around several of the city’s major access points.

Troops advanced from the countryside to the north and south, rebels said, leading to intense clashes. The military and the Syrian Observatory for Human Rights, a Britain-based war monitoring group, said the army had made some gains, but this was disputed by rebels who said they had held them off.

Senior combatants on both sides said pro-government forces were massing in several parts of Aleppo, Syria’s biggest city before the war, now divided into a western zone held by the army and a smaller, besieged area held by rebels.

The commander of an Iraqi Shi’ite militia fighting in support of Assad told Reuters a large force spearheaded by the army’s elite “Nimr”, or Tiger, forces had started to move in armored vehicles and tanks for an attack on rebel-held areas.

Quelling the uprising in the city would give Assad his biggest victory yet of the war and deliver a powerful blow to his enemies.

It is far from clear whether an all-out attempt to storm the rebel-held area is planned soon: that would require a massive assault by the army, backed by Lebanese and Iraqi Shi’ite militias, Iran’s Revolutionary Guards and Russian air power.

The government’s strategy in other locations such as Damascus and Homs has been to use years of siege and bombardment to force eventual surrender, rather than attempting to storm of well-defended territory.

However, Assad’s allies now openly say they have abandoned the peace process and are betting instead on military victory.

“There are no prospects for political solutions … the final word is for the battlefield,” the leader of Lebanon’s Hezbollah Shi’ite movement, Sayyed Hassan Nasrallah, was quoted in a Lebanese newspaper as saying on Tuesday.

The head of Iran’s National Security Council, Ali Shamkhani, was quoted on Tuesday as saying Aleppo’s fate would be determined only “through a forceful confrontation”.

State television reported that the army had retaken al-Farafra district in Aleppo’s Old City and engineering units were clearing mines in the area.

A senior rebel source said the army had taken some positions near that area, but had been forced to withdraw. Neither assertion could be independently confirmed. The army had also been repelled after heavy fighting in assaults on four other fronts, he said, describing it as the biggest wave of ground attacks since the offensive was announced last week.

Zakaria Malahifji, a politburo member of the Fastaqim group which is active in Aleppo, said the army had assembled infantry and heavy vehicles in a military buildup in the city.

“Until today, thank God, attempts to advance have been blocked,” he added.

The senior rebel official said pro-government forces were mobilizing near the rebel-held Sheikh Saeed district on the city’s southern outskirts, near the location of the heaviest fighting this summer in Aleppo.

“They are working to expand on any opening they create,” said the official from an Aleppo-based rebel faction, citing reports from his fighters.