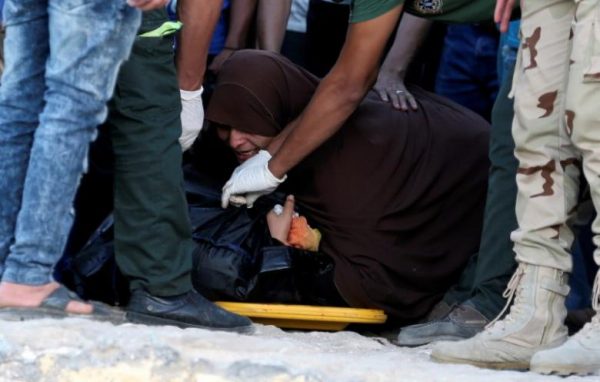 An Egyptian mother reacts beside the body of her son who was on a boat carrying migrants which capsized off Egypt’s coast, in Al-Beheira, Egypt, September 22, 2016. REUTERS/Mohamed Abd El Ghany
Share:
Thirty-three bodies were recovered on Tuesday as a wreck of boat that sank off Egypt last week with hundreds of migrants aboard was lifted from the depths, raising the confirmed death toll to 202, a local official said.

The boat capsized off the Mediterranean coast on Sept. 21. Rescue workers and fishermen said they had rescued at least 169 people, but uncertainty remains over how many might still be missing.

The International Organization for Migration (IOM) said on Tuesday it believed at least 450 people were aboard the vessel and that about 300 perished in all.

“It is one of the worst tragedies of this year, but not the worst,” IOM spokesman Joel Millman told a briefing in Geneva.

“We are concerned about what this says for the rest of the season as the weather turns cold and seas get more difficult.”

Egyptian security sources initially said there had been almost 600 migrants aboard.

Officials said the boat was carrying Egyptian, Sudanese, Eritrean and Somali migrants, and that they believed it was heading for Italy. Four members of the crew were arrested.

More and more migrants have been trying to cross to Italy from the African coast over the summer months, particularly from Libya, where people-traffickers operate with relative impunity. But boats have increasingly departed from Egypt of late as Libya has slipped deeper into lawlessness.

The IOM says that more than 3,200 migrants have died while trying to cross the Mediterranean this year, while more than 300,000 have reached European shores. More than 1 million Middle Eastern, African and Asian migrants entered Europe in 2015.

The IOM said the number of migrants to arrive in Europe this year likely would not reach last year’s level though the number of fatalities was virtually certain to exceed the 2015 total.