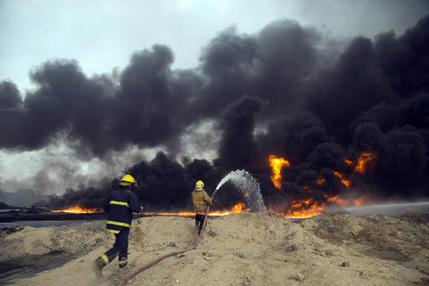 Black smoke continues to billow into the air from the Qayara oil field, damaged by IS militants last month as they fled the town, creating health risks for civilians and troops amassing there. The fires are also clogging up the skies in the area, where critically important airstrikes and aerial reconnaissance missions are taking place almost daily.

Located on the west bank of the Tigris River, about 40 miles (65 kilometers) south of Mosul, Qayara has since become an important staging ground for military and humanitarian efforts ahead of the Mosul operation since it was recaptured by Iraqi forces last month.

“Everything for the Mosul operation hinges on Qayara,” she said. “It’s the staging ground for military forces and it’s where 350,000 of the 1 million people who are expected to flee (Mosul) will either find shelter or pass through.”

There are slow-going Iraqi efforts to contain the fires, but nearly a month after the town was recaptured from the militants, smoke and toxic fumes continue to pollute the air in and around Qayara.

The Iraqi Oil Ministry spokesman, Assem Jihad, said Wednesday that IS militants set fire to 11 oil wells in Qayara to derail security forces and wreak havoc in the area as they fled. He said fires at nine of the wells have been extinguished, but two continue to burn powerfully.

“It does cause some problems. It certainly doesn’t stop anything,” Col. John Dorrian, a spokesman for the U.S.-led military coalition in Baghdad, said. “The Iraqis have asked for coalition help to determine what can be done to put those fires out. We’ll do what we can to support them.”

The images of smoke and flames from the oil wells are reminiscent of the oil fires in Kuwait after the Iraqi military reportedly set fire to hundreds of wells when Saddam Hussein invaded the neighboring Persian Gulf nation in the early 1990s.

“In putting out the fires in Kuwait, the firefighters used water pipes and pumped the water from the Persian Gulf to spray at the base of the fires,” said Kourosh Kian, an expert in petroleum drilling and reservoir engineering.

Kian, a system engineer at GE Aviation, said the simplest method to extinguish these types of fires is to inject water under high pressure at the base of the fire. Since Qayara is on the Tigris River, there would be no problem with the water supply, he said.

Qayara and Najmah, the two main fields in the area with reserves slightly over one billion barrels, came under the control of the Islamic State when it captured Iraq’s Nineveh Province in June 2014.

While Iraqi forces now remain in control of the area, it is far from stable. At the Qayara West air base, where hundreds of U.S. troops are working to advise and assist their Iraqi counterparts, a small rocket that contained a mustard agent landed, Gen. Joseph Dunford, chairman of the Joint Chiefs of Staff, told Congress on Thursday.

A U.S. official, who discussed details of the incident on Wednesday on condition of anonymity, said a small group of U.S. soldiers who inspected remnants of the rocket after it exploded found a black, oily substance on a fragment of metal. An initial test of the suspicious substance showed it contained residue of mustard agent, but a second test was negative.

Militants continue to dwell around the town to the west and along the eastern bank toward the town of al-Alam.

The Iraqi military, backed by coalition airstrikes and coalition advise-and-assist operations, looks to recapture more territory from the militant group, which at one point in 2014 controlled about a third of Iraq and neighboring Syria. U.S.-led coalition forces have launched more than 460 airstrikes around Qayara since August 2014 and more than 1,800 around the city of Mosul itself.

But for aid workers in the country, the fires are an immediate primary concern as they prepare for a potential mass influx of displaced people as Mosul operations get underway.

“There is also a major effort to stabilize Qayara,” Grande said. “Hundreds of thousands of people who may flee Mosul are likely to come in this direction.”