Boy, 6, asks Obama to bring Syrian boy to live with him. “He will be our brother” 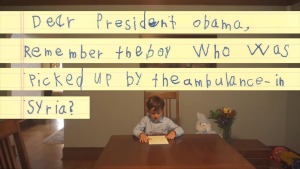 The breathtaking sadness of seeing a boy suffering in Syria’s civil war has prompted a breathtaking offer of hospitality and kindness.

The sight of shell-shocked five-year-old Omran Daqneesh, who was wounded in an airstrike in Aleppo, left many people speechless last month. It also prompted a New York boy named Alex to write President Obama with a simple request: “Can you please go get him” so Omran can become part of Alex’s family?

The generous offer from Alex, 6, is now tugging at heart strings on the Internet and beyond, after the White House released the letter and a short video of the boy reading his request to Obama on its Facebook page Wednesday night.

“We will give him a family and he will be our brother,” Alex wrote. “Catherine, my little sister, will be collecting butterflies and fireflies for him. In my school, I have a friend from Syria, Omar, and I will introduce him to Omar. We can all play together.”

To make things easier for the president, Alex told him that when he arrives with Omran, he can park on the street or in the driveway. The boy said he’ll be waiting with flowers, flags, and balloons. He also promised to share toys with the Syrian child and to study math and language with him.

“Those are the words of a six-year-old boy — a young child who has not learned to be cynical or suspicious or fearful of other people because of where they come from, how they look, or how they pray.”

“We should all be more like Alex. Imagine what the world would look like if we were. Imagine the suffering we could ease and the lives we could save.”

The president read from Alex’s letter earlier this week, when he spoke at the Leaders Summit on Refugees that took place alongside the U.N. General Assembly.

Addressing an audience that included fellow world leaders, Obama said that politicians are sometimes overly focused on maintaining their positions — “and maybe sometimes we forget that the only rationale for doing it is to help that little boy.”

The White House published the letter and video a week after the Obama administration announced its plan to increase the number of international refugees it’s accepting, from 85,000 in 2016 to 110,000 in 2017. As of this month, the U.S. has admitted 11,503 Syrian refugees in the current fiscal year.

The discussion comes as each of four countries — Syria, South Sudan, Afghanistan, and Somalia — have now produced more than 1 million refugees due to ongoing crises, according to the United Nations. Earlier this year, the organization’s refugee agency said that the number of refugees and displaced people worldwide had surpassed 60 million for the first time.

The video of Alex and his letter has now been watched more than 7 million times. It has also generated thousands of reactions — and this, the most-liked comment: ” It was nice that president Obama recognized this,” Ginger Smith wrote. “But it was even sweeter that Alex thought of another human being.”

“Remember the boy who was picked up by the ambulance in Syria? Can you please go get him and bring him to [my home]? Park in the driveway or on the street and we will be waiting for you guys with flags, flowers, and balloons. We will give him a family and he will be our brother. Catherine, my little sister, will be collecting butterflies and fireflies for him. In my school, I have a friend from Syria, Omar, and I will introduce him to Omar. We can all play together. We can invite him to birthday parties and he will teach us another language. We can teach him English too, just like my friend Aoto from Japan.

“Please tell him that his brother will be Alex who is a very kind boy, just like him. Since he won’t bring toys and doesn’t have toys Catherine will share her big blue stripy white bunny. And I will share my bike and I will teach him how to ride it. I will teach him additions and subtractions in math. And he [can] smell Catherine’s lip gloss penguin which is green. She doesn’t let anyone touch it.

“Thank you very much! I can’t wait for you to come!