Syria declares ceasefire over, as bombing of rebels in Aleppo resumes 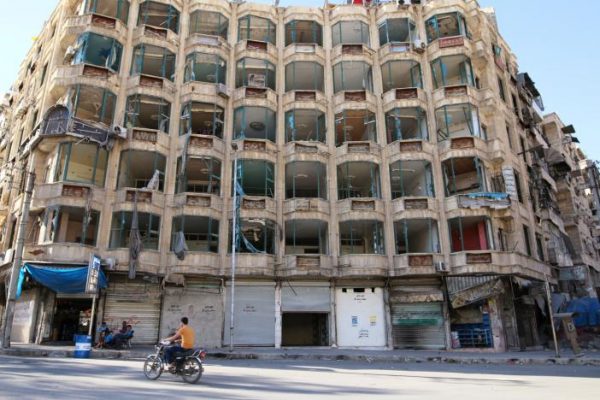 A man rides a motorcycle past a damaged building in the rebel-held al-Shaar neighbourhood of Aleppo, Syria, September 17, 2016. REUTERS/Abdalrhman Ismail
Share:

Syria’s military declared a week-long ceasefire over on Monday and air raids were reported in Aleppo, even as officials from the United States and Russia met behind closed doors in Geneva to try to extend the truce.

Syrian or Russian warplanes bombed rebel-held areas in the city of Aleppo and nearby villages, the Syrian Observatory for Human Rights said, reporting a number of dead and injured.

The monitoring group said it was not clear if the jets were Syrian or Russian. Moscow supports President Bashar al-Assad with its air force.

The raids came as what is likely to be the final attempt by the U.S. administration of President Barack Obama to find a negotiated solution to the five year old civil war appeared close to collapse.

U.S. Secretary of State John Kerry said it was too early to call the ceasefire finished, and the United Nations said that only Washington and Moscow could declare it over, as they were the ones who had originally agreed it.

Washington said it was working to extend the truce but called on Russia to first clarify the Syrian army’s statement that it was over.

Russian and U.S. officials met in Geneva on Monday and the International Syria Support Group – the countries backing the Syria peace process – were scheduled to meet on Tuesday in New York to assess the ceasefire agreement.

But both the Syrian army and the rebels spoke openly of returning to the battlefield.

Syria’s army said the seven day truce period had ended. It accused “terrorist groups”, a term the government uses for all insurgents, of exploiting the calm to rearm while violating the ceasefire 300 times, and vowed to “continue fulfilling its national duties in fighting terrorism in order to bring back security and stability”.

Asked about the army’s statement, Kerry told reporters in New York that the seven days of calm and aid deliveries envisaged in the truce had not yet taken place.

“It would be good if they didn’t talk first to the press but if they talked to the people who are actually negotiating this,” Kerry said. “We just began today to see real movement of humanitarian goods, and let’s see where we are. We’re happy to have a conversation with them.”

Aid was delivered to the besieged town of Talbiseh in Homs province on Monday, the Red Cross said, for the first time since July. The convoy brought in food, water and hygiene supplies for up to 84,000 people, it said.

But most aid shipments envisioned under the truce have yet to go in, especially a convoy destined for rebel-held eastern parts of Aleppo, where some 275,000 civilians are believed trapped without access to food or medical supplies.

“I am pained and disappointed that a United Nations convoy has yet to cross into Syria from Turkey, and safely reach eastern Aleppo,” the U.N. Under Secretary General for Humanitarian Affairs Stephen O’Brien said in a statement.

The United Nations said it had received government approval to reach nearly all the besieged and hard-to-reach areas where it sought to bring aid, but access to many areas was still constrained by fighting, insecurity and administrative delays.

Already widely violated since it took effect, the ceasefire came under added strain at the weekend when Russia said jets from the U.S.-led coalition against Islamic State killed more than 60 Syrian soldiers in eastern Syria.

Assad called that incident “flagrant aggression”. Washington has called it a mistake.

The ceasefire is the second negotiated by Washington and Moscow since Russia joined the war. But while it led to a significant reduction in fighting at the outset, violence has increased in recent days and aid has mostly failed to arrive.

Plans to evacuate several hundred rebels from the last opposition-held district of Homs city have also overshadowed the agreement, with rebels saying it would amount to the government declaring the ceasefire over. The Homs governor said the plan had been postponed from Monday to Tuesday.

An end to the truce could doom any chance of the Obama administration negotiating a Syria breakthrough before it leaves office in January. Kerry overcame scepticism of other administration officials to hammer out the deal, gambling on cooperation with Russia despite the deepest mistrust in decades between the Cold War-era superpower foes.

Washington and Moscow back opposite sides in the war between Assad’s government and the insurgents, while both oppose the Islamic State jihadist group. Russia joined the war a year ago on Assad’s side, tipping it firmly in his favor.

The politburo chief of one prominent Aleppo rebel group, Fastaqim, said the agreement had “practically failed and has ended”, adding that it remained to be seen if anything could be done “in theory” to save it.

Zakaria Malahifji, speaking to Reuters from the Turkish city of Gaziantep, also indicated rebel groups were preparing for combat: “I imagine in the near future there will be action by the factions”.

Monitors reported clashes in and around Aleppo on Monday. The government blamed some of the violence on what it said was an insurgent assault, but another rebel official denied they had yet launched new attacks.

The opposition High Negotiations Committee spokesman Riad Nassan Agha said the government side had never committed to the truce: “Air raids by Russian and Syrian warplanes, which haven’t stopped, suggest the truce never started in the first place.”

The U.S.-Russian deal, whose details are still secret, calls for the eventual joint U.S.-Russian targeting of jihadists including Islamic State and the former Syrian branch of al Qaeda.

That would mean the former superpower enemies fighting together for the first time since World War Two, a measure even more remarkable for the distrust between them since Russia annexed Ukraine’s Crimea Peninsula in 2014 and the United States and Europe responded by imposing financial sanctions.

But the peace initiative has faced enormous challenges from the outset, including how to disentangle nationalist rebels backed by the West from jihadists not covered by the truce.

There has been no sign of compromise on the issue at the heart of the war: the future of Assad, who enjoys firm Iranian and Russian military backing that is buttressing his strongest military position in years. The dispute over his fate has made a mockery of all previous diplomatic efforts to end the fighting.