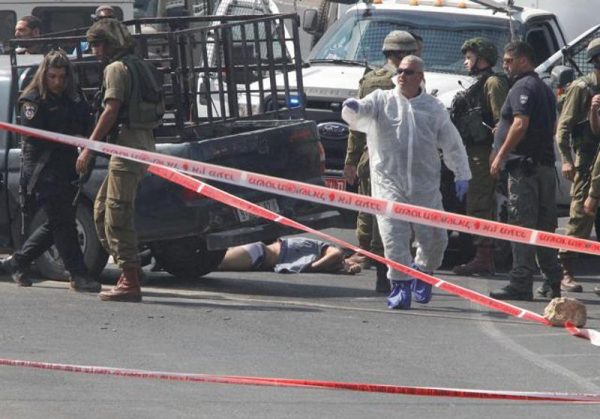 The first incident on Friday occured at the Damascus Gate entrance to East Jerusalem’s Old City. Israeli police said the man, who was carrying a Jordanian ID, attempted to stab Israeli soldiers with a knife.

The unidentified man, 28, was shot dead at the scene.

Police said an investigation had been launched as to “why he carried out the attack”.

Al Jazeera’s Imran Khan, reporting from Jerusalem, said the man had come in through the Allenby bridge crossing from Jordan on Thursday, according to Israeli police.

The second incident on Friday took place at a bus junction near the Israeli settlement of Kiryat Arba in Hebron. A Palestinian man driving a car with a female passenger allegedly rammed the vehicle “into a civilian bus stop”, the Israeli military said in a statement.

“Forces at the scene fired at the vehicle resulting in the death of one of the assailants while the other was wounded,” the army said.

The military added that three Israelis were wounded, one critically.

Friday’s third incident took place in the Tel Rumeida neighbourhood of Hebron in the occupied West Bank when Israeli forces shot dead a Palestinian man who allegedly attempted to stab a soldier.

In a separate incident late on Thursday, Israeli forces shot a Palestinian man during a military raid in the village of Beit Ula, in the southern occupied West Bank district of Hebron.

The man, identified as Mohamed al-Sarrahin, died of his wounds later on Thursday.

In the latest wave of increased violence in the occupied Palestinian territories since October 2015, it is estimated that Israeli troops and settlers are responsible for the killing of at least 225 Palestinians, including unarmed demonstrators, bystanders and alleged attackers.

Thirty-five Israelis were also killed in stabbing and shooting incidents carried out by Palestinians.

Palestinians are frustrated by Israel’s decades-long occupation and with peace talks going nowhere.

“There is a lot of concern here between Palestinians and Israelis that if something is not done in terms of a peace process, then these attacks are just going to continue,” Al Jazeera’s Khan said.