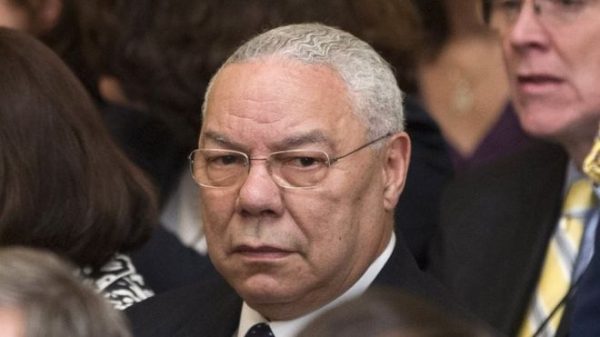 The Republican retired four-star general’s comments were revealed in a hack on his personal emails.

The emails were posted on DCLeaks.com, which has reportedly been tied to other recent high-profile hacks.

Mr Powell, who has been quiet during the election, said he had “no further comment” but was “not denying it”.

He also criticised Democrat Hillary Clinton’s “hubris” as he attacked the way she handled her private email crisis.

The remarks about Trump were part of an email sent on 17 June to Emily Miller, a journalist and Mr Powell’s former aide.

The former secretary of state, who served during George W Bush’s administration, also called Mr Trump an “international pariah” who “is in the process of destroying himself”.

“No need for Dems to attack him,” the email said, according to BuzzFeed News.

In a separate email sent on 21 August, Mr Powell also criticised Mr Trump for promoting the birther movement, which questioned whether President Barack Obama was born in the US.

“Yup, the whole birther movement was racist,” the email read. “That’s what the 99% believe. When Trump couldn’t keep that up he said he also wanted to see if the certificate noted that he was a Muslim.”

But the leaked emails also revealed Mr Powell’s frustrations with Democratic presidential nominee Hillary Clinton and her handling of her use of private email while at the state department.

“Sad thing… HRC could have killed this two years ago by merely telling everyone honestly what she had done and not tie me into it,” the email read, referring to Mrs Clinton.

“I told her staff three times not to try that gambit. I had to throw a mini tantrum at a Hampton’s party to get their attention.”

Mrs Clinton has pointed to Mr Powell’s use of his personal AOL account at the state department as an example of why her email use was common practice.

“Everything HRC touches she kind of screws up with hubris,” he said in an email last year to his business partner Jeffrey Leeds.

Mr Powell, who crossed party lines in 2008 to endorse Democratic Barack Obama, has tried to float above this year’s tendentious presidential election. So much for that.

First the government released his note to Democrat Hillary Clinton advising her on how to use personal email for back-channel communications while secretary of state.

Now – in an ironic twist – his personal email has been hacked, revealing sweeping denunciations of Mr Trump and some sharp criticisms of Mrs Clinton.

Mr Powell is generally well liked by Americans, although some on the left hold him responsible for convincing the US public of the need to invade Iraq in 2003 and others on the right view him as a squishy Rino (Republican in name only).

Although Mr Powell tried to keep his opinions private during the course of this election, he was more than happy to share them with prominent journalists.

Now, he’s not denying that he authored the leaked documents, which will likely give his words more punch. At this point, with Mr Trump possibly only two months away from winning the presidency, his earlier worries that speaking out against Trump might “embolden him” aren’t really relevant anymore.